Capturing the Heart: Healing Through Art and Story

At Native Hope, we work every day to empower and strengthen Native American youth. We know how many challenges they face—from abuse, addiction, and hunger to trauma and a lack of job opportunities in their larger communities.

We also see their beautiful resilience and hope. For today's blog, we are featuring the drawings and reflections of Dennis Metcalf, a young man of the Hunkpati Oyate, who is facing down difficulty and discovering healing through art. His work tells a powerful story of uncovering culture and identity.

While examining the artwork of others on our first visit to Rapid City, South Dakota’s “Art Alley,” I snapped this photo of Dennis. Watching him truly see the beauty that others had created for an unknown audience, intrigued me—it wasn’t the first time his wonderment caught my eye. You see, Dennis is an artist, who for most of his life has revealed himself solely through his work—work certain to capture anyone’s heart!

Dennis created this sketch below as a gift. He explains, “In it are the most important figures in my life. While drawing it, I was thinking about how important women are to my life and my culture, especially mothers and sisters.” Dennis still mourns the loss of his sister who gave him so much comfort and support while growing up. He understands the value of mentorship and wants to provide that for others someday. 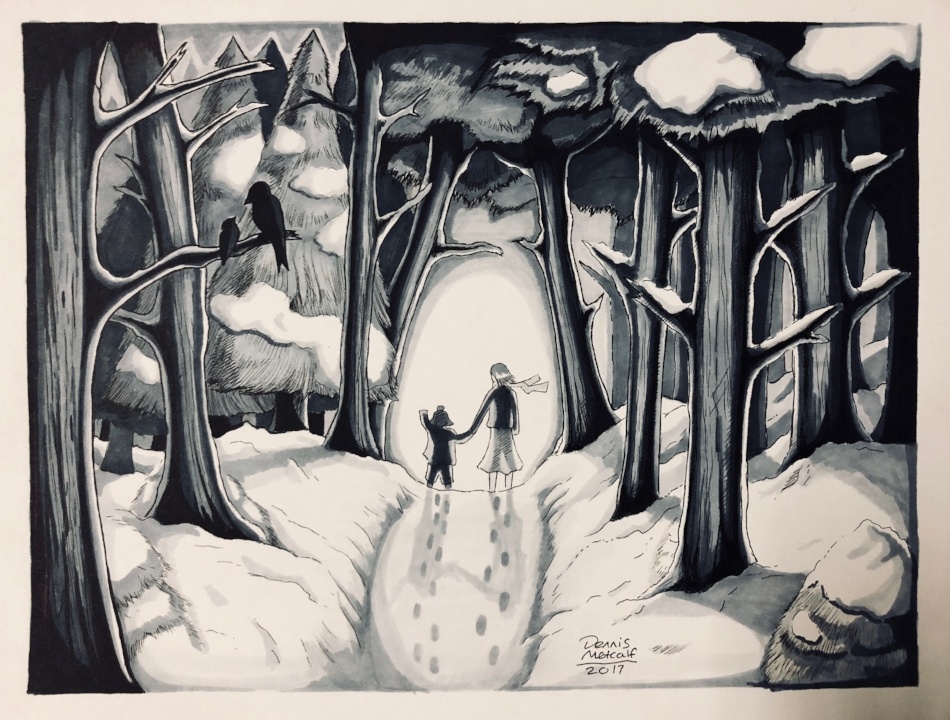 His struggles have inspired him to be a protector, which, at times, has proven overwhelming for Dennis. He suffers from Post Traumatic Stress Disorder (PTSD), a disorder which affects many Native American young people. In fact, a recent report commissioned by the Department of Justice found that “AI/AN children experience posttraumatic stress disorder at the same rate as veterans returning from Iraq and Afghanistan and triple the rate of the general population."

While his PTSD triggers bouts of severe depression and anxiety, his artwork and love of learning have helped to keep him moving forward. 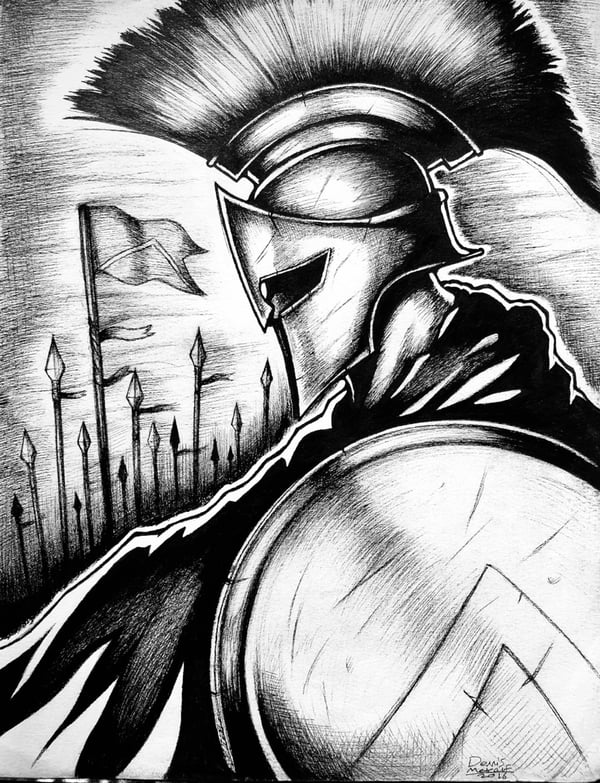 His rendition of the Spartan warrior represents the ultimate protector: one who possesses the masculinity and power to defend a nation. “They were always the ideal example of a true warrior—only 300 of them stood up to the Persians, fighting off the invasion,” Dennis says, when reflecting on his inspiration for the sketch.

As a Native American, Dennis understands that his people went through a similar fight to defend their lands. He did not, however, grow up practicing his culture, so his cultural roots are still developing. “I have always wanted to have more of my culture represented in my art, so I thought if I started to draw cultural pieces, I would learn,” Dennis offers.

Dennis is like many young people trying to connect with a culture that was nearly destroyed. Fighting to find an identity remains key for young Native Americans like Dennis—having something to hold on to gives hope. 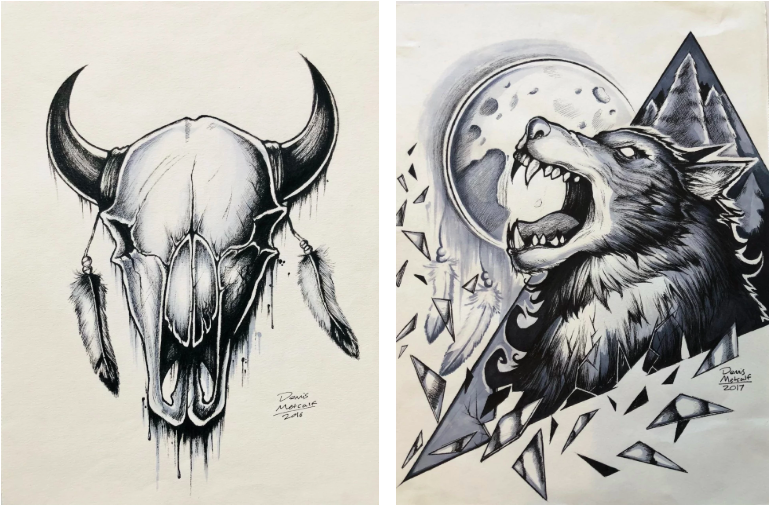 “As a kid, I doodled with my pencil—I seemed to always have one in hand. I doodled when doing schoolwork and at home in my bedroom,” shared Dennis. “I didn’t really have toys.” Dennis also liked to read, watch movies, and play video games—not only did these give him the opportunity to escape from reality, but also helped him see life differently.

“The Giant Robot looking at the man represents a unique look at perspectives. “When I drew it, I wanted to show that no matter how big or small the individual, there is a fascination with the other.” How true! Each of us have a unique viewpoint, and when we realize to value various perspectives, new ground can be broken.

Varying his style is another aspect of Dennis’s development as an artist. He studies and experiments in everything. “I want to learn animation and prop making for movies,” he suggests. “I want to go to the Institute of American Indian Arts and maybe participate in the Imagineers program.” Naturally, Dennis enjoys drawing in a “Disney” style.

The Squid was drawn for an art contest that had minimal parameters: It must be nature-based and underwater. “The hook with the sign “food” represents “hope” for something better than the morbid surroundings, but as we know, anything free comes with a catch,” Dennis smiles and tells me, "just another perspective." 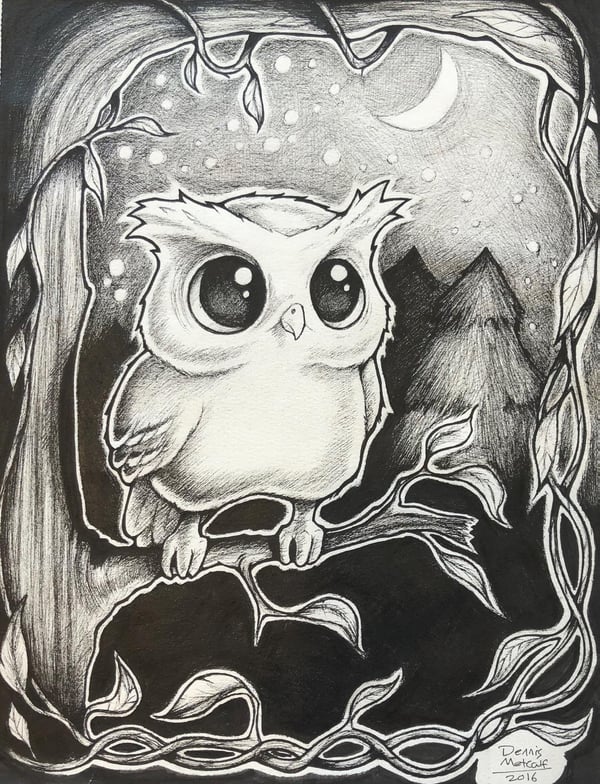 “Owls are my favorite animal; to me, they represent my dad,” remarks Dennis. His father died this spring of complications from diabetes and other chronic conditions. “My dad loved owls, too, they just remind me of him.”

A sketch doesn’t take Dennis too long; in fact, the basic shell of the drawing takes him an hour to an hour and a half, but the details and shading can take several more hours.

His drawings expose a complex voice that deserves to be heard. Dennis is on a journey of healing through sharing his art and story with the world. The act of drawing give Dennis a space to explore, to process his life, to express himself, and ultimately to dream.