Usually, August means excitement for children. Back to school means buying school supplies and new clothes for the school year, plus the benefit of seeing their friends again. However, for many Native Americans, it is a time filled with anxiety and stress because of negative school experiences. Not only is this an effect of family historical trauma but also an effect of low self-esteem and a lack of cultural identity.

There are numerous factors, but one deeply rooted issue goes unaddressed, year after year. The boarding school era (the 1860s-1960s) failed to offer the opportunities it promised Native people but succeeding in stripping them of their culture.

The issues surrounding Native American education are rooted in a history of upheaval, beginning with the government relocation of Native children from their families and tribal way of life to long-term boarding schools. It was a common practice at the time for this type of school to allow disciplinary punishment, such as physical beatings or starvation, of Native American children for speaking their Native language or practicing their spiritual beliefs. These schools, however, would later be exposed and dismantled for allowing such excessive forms of abuse. The circumstances that Native children faced during this time in history have continued to have deep-rooted ramifications on the way American Indians relate to mainstream education. Many of those who attended boarding schools still suffer from mental health issues, depression, and anxiety. 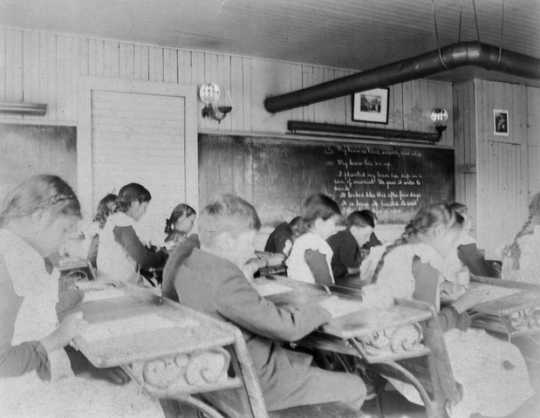 The 1969 U.S. Senate Report entitled “Indian Education—A National Tragedy, A National Challenge” highlighted the disastrous effects that forced assimilation placed on the education of Native American children. The specific failures of the education system at that time were noted as

This failure is a direct result of a derogatory attitude held by some Americans toward Native people and communities. Most people in the U.S. held negative stereotypes of Natives labeling them alcoholics, lazy, and much more. These stereotypes have followed children into the classroom causing low self-esteem and a disconnect from the curriculum—one that doesn’t recognize the true history of Indigenous Americans but a one-sided colonial account.

Thus, it stands to reason that many Native students a negative attitude toward education has been transferred down through generations and affects children today. In fact, Native American children have the highest dropout rates of any ethnic group in the United States. Recent statistics from the Bureau of Indian Affairs have noted that 29% to 36% of all Native American students drop out of school, mostly between the 7th and 12th grades. These numbers are even higher in areas where the parents complain of a major lack of understanding of Native culture within the school/community. This means only 65 percent of Native students graduate high school—this is the lowest graduation rate among American students. The post-secondary success rate is more disparaging with only 9.3 percent of all Native Americans earning a college degree.

Native Hope recognizes this crisis among young Natives who struggle to walk in two worlds: the Native world and the contemporary world. These are two very different places—especially in the world of education. While the federally-funded boarding schools of the past are gone, its effects linger. Native students are confronted with a world that does not understand them nor their customs. Consequently, they are enveloped in an environment of isolation and self-doubt.

Because of the impoverished economies of many reservations, many Native American children attend underfunded schools. This means their educational opportunities are insufficient—schools, programs, and teachers do not receive adequate funds. Even the federal government's Impact Aide program, in place to serve underprivileged children, is far from adequate.

Every child deserves the tools needed to succeed in school

Education is part of the fabric that weaves the future and opens up doors of opportunities to accomplish dreams. For generations, however, the educational rights of Native Americans have been deteriorating under the weight of historical trauma and cultural contempt. 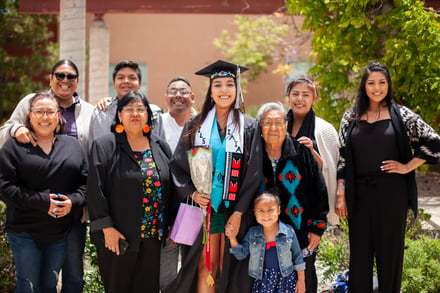 Native Hope recognizes the importance of healing these historical wounds and restoring trust.

We also respect the sovereignty of Native nations. Their leaders and communities know what is best for their people. Today, despite limited funding, tribes strive to rebuild a strong foundation and achieve sustainability. These resilient people are on a journey of rediscovery and healing.

Native Hope is a resource helping Native communities meet their needs. We talk with community members, listen to their needs, and partner with tribal entities—in a unified effort to dismantle barriers, inspire empowerment, and give hope for a promising tomorrow.

Your gift today will provide HOPE to Native American children in need.
You can help create a future full of hope and promise!