"A little knowledge is a dangerous thing."

In the first installment of this series, I mention this notion regarding Native American Land and Loss. The age-old phrase still applies as we look at aspects of U.S. history from 1840-1887. During this period, many Americans thought they knew best for the Natives of this country, and the more these friends and enemies, alike, applied their "knowledge"—the more devastation occurred.

The efforts to contain tribes

By 1840, the U.S. government forcibly moved over 100,000 Native Americans west of the Mississippi—to Indian territory. The Five Civilized Tribes (Cherokee, Choctaw, Chickasaw, Creek, and some Seminoles) relocated to modern-day Oklahoma or Kansas, while several others wound up further north in Illinois, Wisconsin, Iowa, Minnesota, Nebraska, North and South Dakota, Montana, Wyoming, or Colorado. 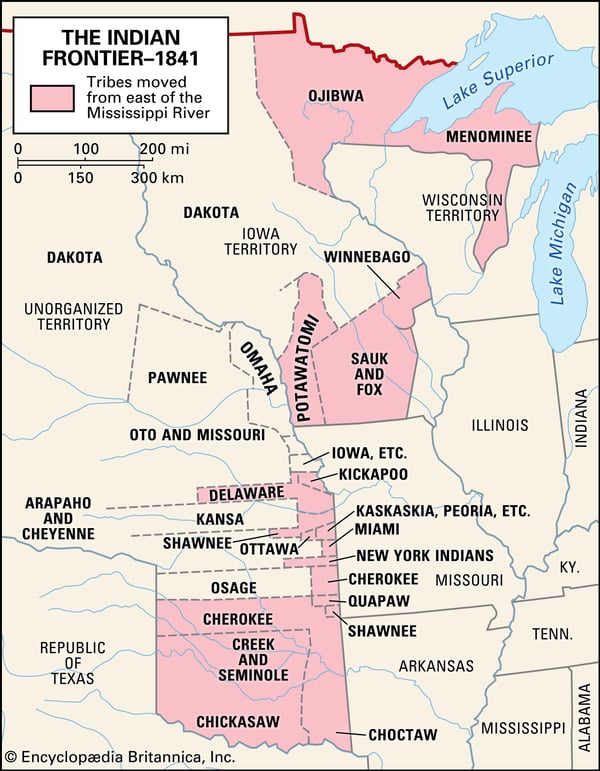 Thousands died throughout the relocation years—1830-1862 and 1867-1892. Tribes suffered huge losses during forced relocations—pain and suffering prevailed for all tribes due to the government's handling of the settlers’ lust for land and its resources. Consequently, the government broke treaties made with the Native Americans. These treaties made promises to the tribes: property, supplies, and sovereignty. Each broken treaty meant the loss of land, life, and hope.

In 1851, Congress passed the Indian Appropriations Act of 1851, which authorized the creation of reservations for Indians in Oklahoma, with other states following suit. Many tribes resisted the move to a reservation, creating even more tension among the U.S. military, workers, settlers, and Natives. The Plains Indian Wars began—from the Comanche raids in northern Texas (1863) to the Dakota Indian Uprising (1862)—bringing unrest throughout Indian Country.

After growing weary of events like the Sand Creek Massacre of 1864 and economic hardship, many tribes agreed to give reservation life a chance in the late 1860s. Indians found it difficult to conform to life on a reservation. The Plains tribes were hunters and gatherers. They were nomadic, following the buffalo and other game, which was necessary given the arid climate. The Bureau of Indian Affairs assigned an Indian agent to each reservation who, in turn, took care of all reservation business, including rations. Rations and supplies often arrived late or in bad condition from the long trip. Tribes often found themselves without enough food and with no ability to hunt for themselves.

No more treaties—wardship and hardship

The Indian Appropriations Act of 1871—which was to be a funding bill—dealt a drastic blow to the Native Americans. [It] "declared that Indigenous people were no longer considered members of 'sovereign nations' and that the U.S. government could no longer establish treaties with them." While the government insisted that it would make right on the treaties in existence before 1871, the practice would end. In essence, this act invalidated the Supreme Court's 1832 ruling that Native people were members of "sovereign nations"—President Jackson must deal with them as such. So, Native Americans became wards of the government. The government's power over the tribes amplified.

The 1870s brought military expeditions into the northern Plains, which inspired further distrust of the whites. Thus, more conflicts broke out between the military and the Indians. Lieut. Col. George A. Custer led an expedition to the Black Hills of South Dakota and found gold traces. In 1875, the U.S. military secured the Black Hills, the Lakota's sacred land, as theirs, sparking a short-lived war. Oglala Lakota Chief Crazy Horse and Cheyenne-Lakota Chief Sitting Bull orchestrated the defeat of Lieut. Col. George A. Custer and his men in the Battle of Greasy Grass (Little Bighorn) (1876). Although the Indians had won this battle, soon the U.S. military and its overwhelming resources defeated the remaining Indian warriors—confining them to reservations.

By this time, 1880, Indian Country fell victim to tremendous land loss—Oklahoma housed at least 27 tribes, some warring. The U.S. government seized more land reducing the Great Sioux Nation to a third of its size with just a smattering of Indian lands in other states. Settlers continued to cry for more lands and their safety from the Indians. As a result, the U.S. government sought to solve the Indian Problem once and for all. 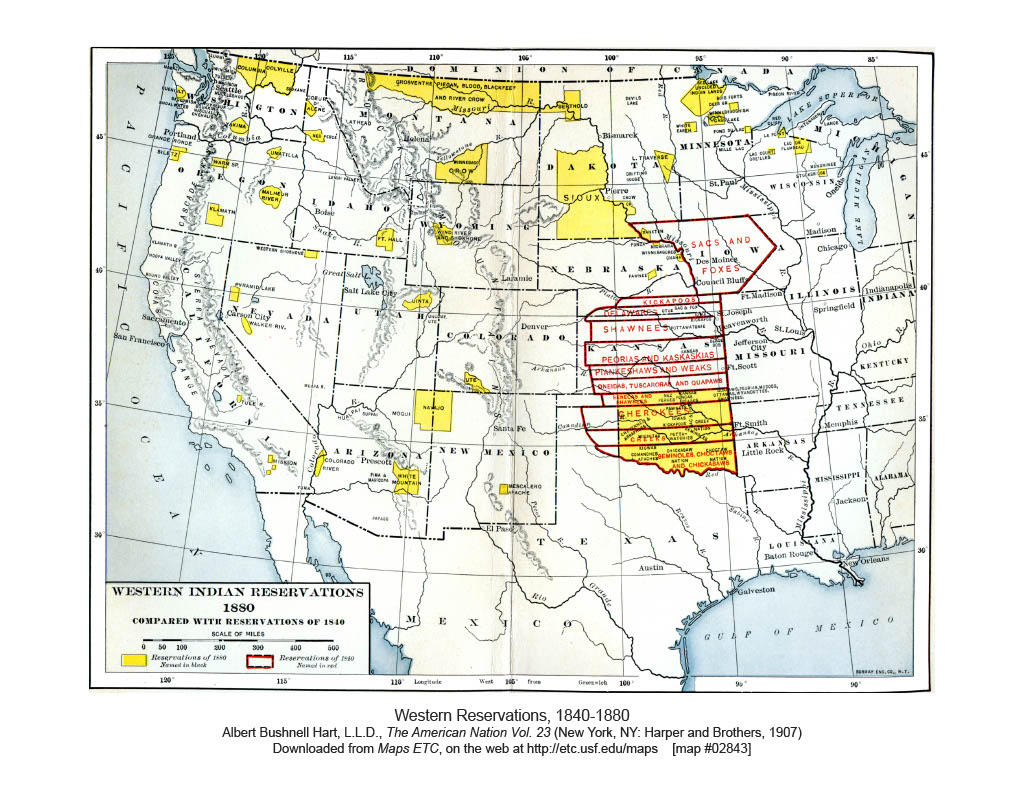 The search for solutions

The Indians had allies. In 1879, several affluent women aimed to use Christianity to reform the Indians and formed the Women's National Indian Association. Ponca Chief Standing Bear and Susan LaFleshe (Omaha) and Christian missionaries, who had worked in the Dakota territory, inspired the organization's work. Helene Hunt Jackson wrote A Century of Dishonor (1881) about the mistreatment of the Indians by the U.S. Government and gave all Congress members a copy. She aimed to change the way the U.S. handled Indian policy. Women from all over the country found the Indian rights a noble and charitable cause.

In 1882, prominent men formed the Indian Rights Association (IRA) in Philadelphia after hearing about the reservations' poor living conditions, particularly the Dakota Territory. The IRA moved swiftly, forming lobbyist groups in Washington, D.C. Members worked to "bring about the complete civilization of the Indians and their admission to citizenship." The men lobbied for Congress to make this happen. Eventually, the IRA found sympathizers in several politicians. Senator Henry Dawes of Massachusetts sponsored the Dawes Severalty Act or the Dawes Act of 1887 (General Allotment Act).

The legislation and its journey to law

The Dawes Act's original intention was to assist with the assimilation of Indians to American life through land ownership as a path to citizenship. Authors of the Dawes Act felt by offering Indians an allotment of land (160 acres), the same as white settlers benefitting from the Homesteaders Act of 1862. Indians would assimilate faster if they became farmers and ranchers, settling on the land. The act specified all tribal lands, all 138 million acres, be divided into individual lots of 160 acres and offered to each head of household with unmarried, adult children receiving 80 acres each.

While the act seemingly treated Indians like other homesteaders, for the Dawes Act to pass Congress, rivals thought it essential to destroy the tribal way of life by breaking up the land. They believed the Native way of life was communal and communistic—many viewed Natives as heathens not competent to own land. Thus, the allotted land went to those deemed "competent," usually mixed-bloods with the full-blooded Indians falling under restriction. Restricted ownership meant the land was placed in trust for 25 years, which meant they could use it but not own it until the trust period was over. Competent landowners received land and citizenship, so they were subject to taxes and other fees.

Last, to make way for more settlers, remaining land would be available for public sale after the allotments to the Native Americans." Ultimately, Congress agreed to an amendment including these qualifications, and President Grover Cleveland signed the Dawes Act into law in January 1887 and took effect in February. 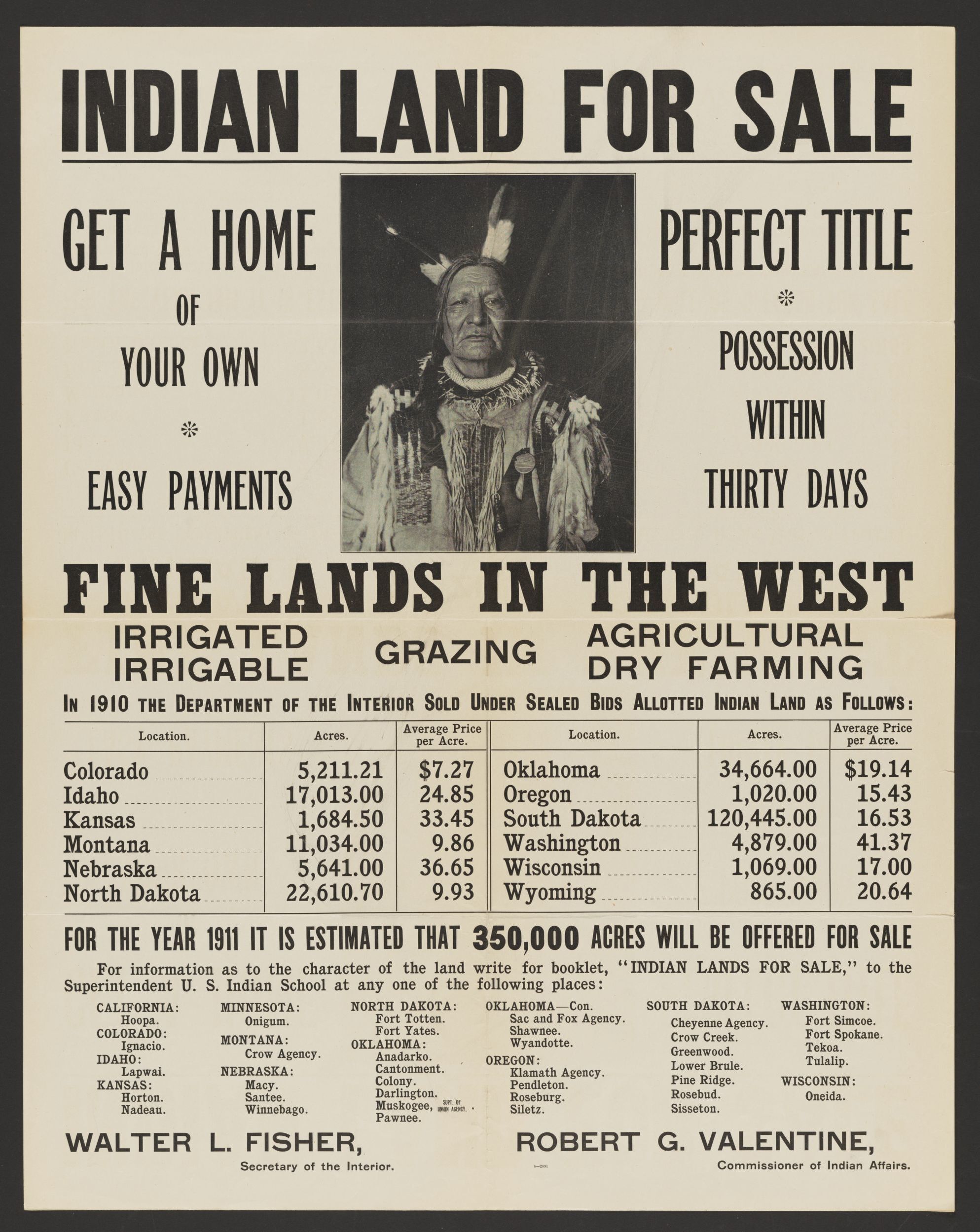 The framers of the Dawes legislation did not anticipate the problems facing Native Americans under this new law. They did not know how the law affected old treaties. The Dawes Act delivered further devastation to a ravaged people.

The third installment of this series: Native American Land and Loss, will discuss the devastation and its lasting effects on Indian Country. (read Part I here)

An education journey and the need to go further