“That hand is not the color of yours, but if I prick it, the blood will flow, and I shall feel pain. The blood is of the same color as yours. God made me, and I am a man." -Chief Standing Bear, Ponca

Chief Standing Bear stood in the U.S. Circuit Courtroom in Omaha, Nebraska, on May 2, 1879, before Judge Elmer S. Dundy. His courtroom appearance was the first time an Indian addressed a judge in a court of law. Standing Bear sought to prove that he, too, was a citizen of the U.S. and had rights under the 14th Amendment to the U.S. Constitution.

There, he offered an explanation for his journey from Indian Territory in Oklahoma back to his homelands in northeast Nebraska: Chief Standing Bear's son Bear Shield died in Oklahoma—his dying wish was to be buried on the land of his ancestors. To keep the promise Standing Bear made to his son, he and a few dozen followers set out for the Niobrara River in Nebraska in January 1879, without permission from the U.S. government. The 600-mile trek was brutal.

To read the background of events leading up to this journey, read Part 1 of Chief Standing Bear’s story. 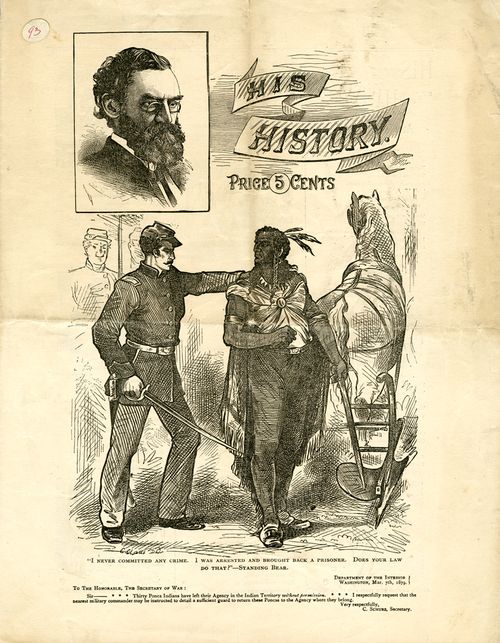 On March 4, the travelers arrived at the Omaha Reservation—they and their horses suffered from starvation and illness. Word of their journey leaked to Washington, D.C., and by March 27, the Ponca band found themselves detained at Fort Omaha under orders of General George Crook. Soon, Thomas Tribbles of the Omaha Daily Herald began publishing sympathetic articles to win support to free the Ponca. Omaha lawyers John Webster and Andrew Poppleton decided to represent Chief Standing Bear and his people, in turn. They filed a writ of habeas corpus (used to bring a detainee before the court to determine if his detention is lawful) against the U.S. government: United States, ex rel. Standing Bear, v. George Crook. The trial's dramatic events are told here in Part 2 of Chief Standing Bear’s story.

Chief Standing Bear's trial took two days, but it took Dundy much longer to render a verdict. On May 12, 1879, Judge Dundy delivered his judgment to a packed courtroom. Prior to delivering his ruling, the judge explained to Chief Standing Bear, "So far as I am individually concerned, I think it not improper to say that, if the strongest possible sympathy could give the relators title to freedom, they would have been restored to liberty the moment the arguments in their behalf were closed. No examination or further thought would then have been necessary … but in a country where liberty is regulated by law, something more satisfactory and enduring … must furnish and constitute the rule and basis of judicial action" (Truer, 1999, p127).

Dundy went on to explain the Ponca were not "combatants," nor were they in violation of treaties as the Indian Appropriations Act (1871). The Act "declared that American Indians were no longer considered members of ‘sovereign nations’ and that the U.S. government could no longer establish treaties with them." The Act nullified the sovereignty Indian tribes had possessed since George Washington began making treaties with them as independent governments, and essentially, this meant they became wards of the state. However, the goal was to assimilate them into America's Western society. Dundy based his decision primarily on this Act. He recognized that Chief Standing Bear testified that once he and his followers left the Poncas in Oklahoma, they left their tribe.

What did this mean? It meant this band of travelers had forsworn any assistance from the U.S. government as Indians and should now be considered as citizens of the United States. Standing Bear and those with him were on their own in this unchartered territory. Dundy felt compelled to determine a broad ruling that would establish a precedent for other such cases:

"Every 'person' who comes within our jurisdiction, whether he be European, Asiatic, African, or 'native to the manor born,' must obey the laws of the United States...When a 'person' is charged, in a proper way, with the commission of crime, we do not inquire upon the trial in what country the accused was born, nor to what sovereign allegiance is due, nor to what race he belongs. The questions of guilt and innocence only form the subjects of inquiry. An Indian, then, especially from off his reservation, is amenable to the criminal laws of the United States, the same as all other persons."

Dundy laid out his findings in an eleven-page ruling. In short, he ruled that an Indian is a "person" with rights to file suit when detained by authorities or his liberties restrained. The judge explained that all citizens, including Indians, had the right to "life, liberty, and the pursuit of happiness," so if Standing Bear wanted to declare his expatriation from the Ponca—it was within his rights as long as he did so within the law and did not trespass on "forbidden ground." Finally, Dundy ruled General Crooks had no rightful authority to forcibly remove the Ponca, and they must be discharged (Truer, 128). 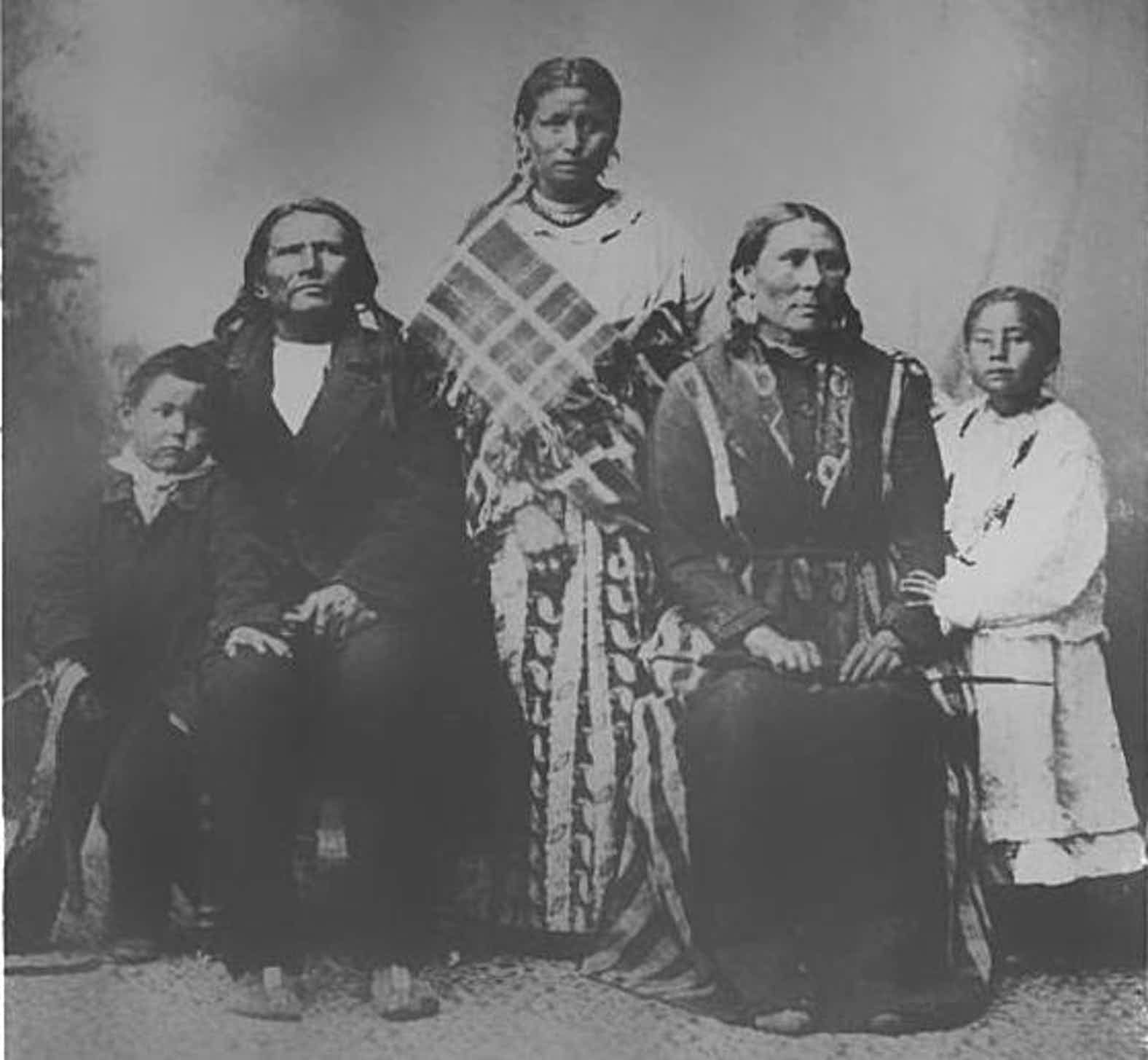 Standing Bear did not make a political statement about the verdict. His original statement made in his courtroom address to Judge Dundy—"God made me, I am a man"—would serve. He had a promise to fulfill. He was free. Free to return to his homelands. Free to bury his son.

However, this freedom came with a large price. Chief Standing Bear and his followers were now a people without a home. He could not lay claim to his former homelands, as the land belonged to the Lakota. He could not go back to Indian Territory, as he no longer belonged to the larger Ponca tribe. He was free, which meant no more government support. He was a citizen of the United States. 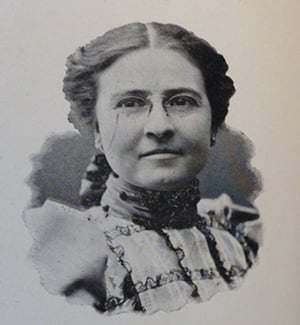 Judge Dundy's ruling did not apply to all Indians. It only belonged to Standing Bear and his band. Thus, Thomas Tribbles encouraged Chief Standing Bear to become a visible and vocal advocate for Indian rights. In the months immediately following his victory, Standing Bear, along with Tribbles and an interpreter, Susette LaFlesche [Bright Eyes], departed on an Indian Civil Rights tour to the East. Chief Standing Bear spoke, with the assistance of Bright Eyes, to thousands. Former abolitionists turned their attention to the "Indian problem" (Truer, 129).

Chief Standing Bear's words moved Helen Hunt Jackson, a prominent liberal from Amherst, Massachusetts. She went on to write a book, A Century of Dishonor (1881), which delineated the U.S. government's treatment of the Native people and gave suggestions as to how U.S. policies should look in the future. Hunt gave a copy of the book to every member of Congress to gain their attention.

Although Chief Standing Bear, Tribbles, and LaFlesche's tour lasted only a few months, its effects were lasting. People could no longer ignore the Indians. Many liberals were eager to make Indians citizens of the U.S.: "Every man is born into the world with the right to his own life, to personal liberty, and to inherit, earn, own, and hold property. These rights are given to him by the great God: not because he is a white man, a red man, or a black man, but because he is a MAN" (Truer, 131). These are the words of Clinton B. Fisk, an abolitionist and a member of the Bureau of Indian Commissioners. Fisk and others continued to advance the work of Standing Bear and others at the end of the 19th century.

Chief Standing Bear's band of 30 settled on an unclaimed island of the Niobrara for ten years. In 1890, ten years later, the U.S. government granted the Ponca a small land plot along the Niobrara's west bank. Chief Standing Bear lived there quietly and peacefully until his death in 1908. Eventually, the tribe itself received 26,000 acres in Knox County, Nebraska. 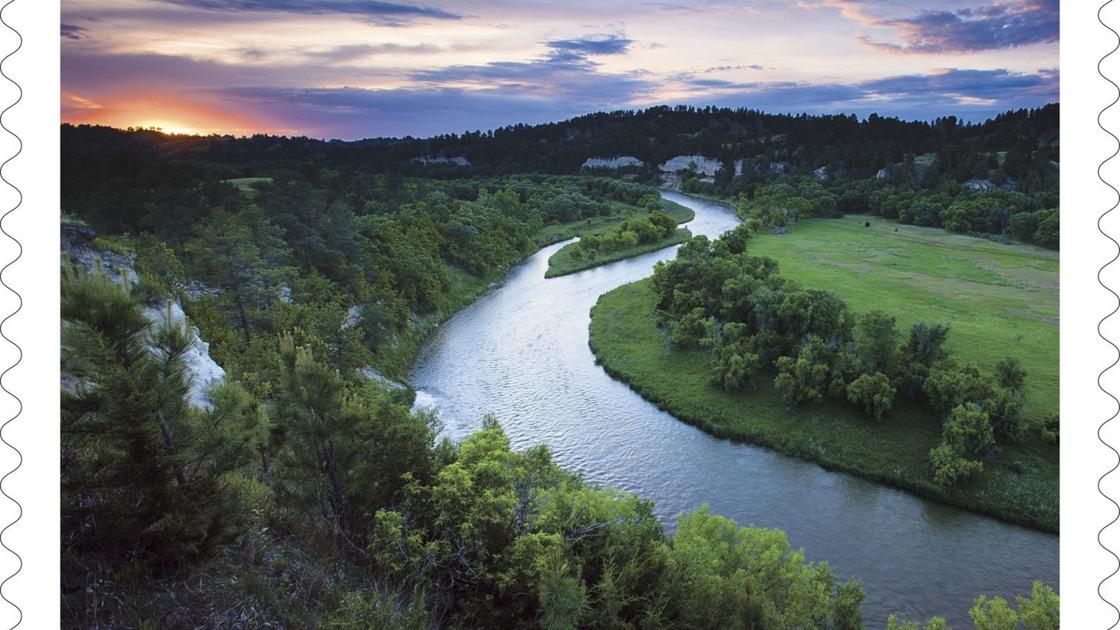 Chief Standing Bear's descendants, the Northern Ponca of Nebraska, have endured an ongoing struggle with the U.S. government's Indian policies, including a recent battle to restore their status as a federally recognized tribe. Many Ponca credit Standing Bear's perseverance and prowess for the path he paved for them. "The Ponca Tribe of Nebraska is one of the most successful Tribes in Indian Country when it comes to effective lobbying and passage of favorable legislation and administrative policies." 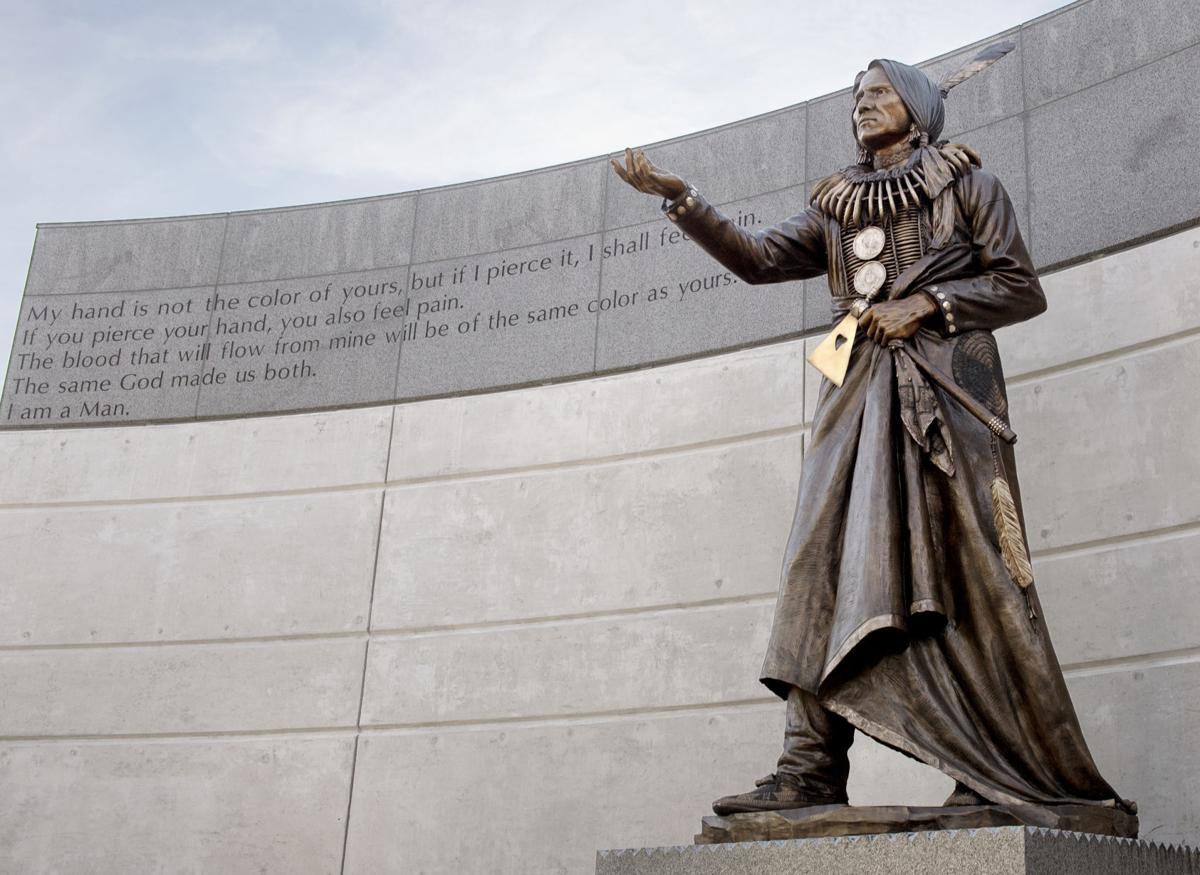 While well-documented, Chief Standing Bear's story remains one of the unknown heroic stories of American history. Standing Bear stood in Judge Dundy's courtroom with his outstretched hand demanding the world see him for what he was—a man. He stood with conviction and strength. He offered all he could give.

"In 2015, this story [Standing Bear's] so moved Nebraska native Don Campbell that he approached the Nebraska Commission on Indian Affairs [NCIA] and the city of Lincoln, Nebraska, with a vision to commission a world-class bronze statue to honor the story of Chief Standing Bear." Campbell's private foundation and the NCIA hired famed Sculptor Ben Victor of Idaho to create such a piece.

Victor's 11-foot statue of Chief Standing Bear arrived in the fall of 2017 and now stands in front of the Nebraska state capitol in Lincoln, Nebraska, in the Centennial Mall. The piece is "exquisite— the beadwork on his hips, moccasins and neckpiece; the writing on the medallions; the pieces in the feathers; and, especially the lines and ridges in his hands and face that make the figure become…Standing Bear."

To further honor the importance of Standing Bear's place is - not only Nebraska's history but also American history - "a second casting [of the statue] was installed in 2018 at the headquarters in Niobrara of the Ponca Tribe of Nebraska." Congress unveiled a third and final casting in Statuary Hall of the U.S. Capitol in September of 2019. 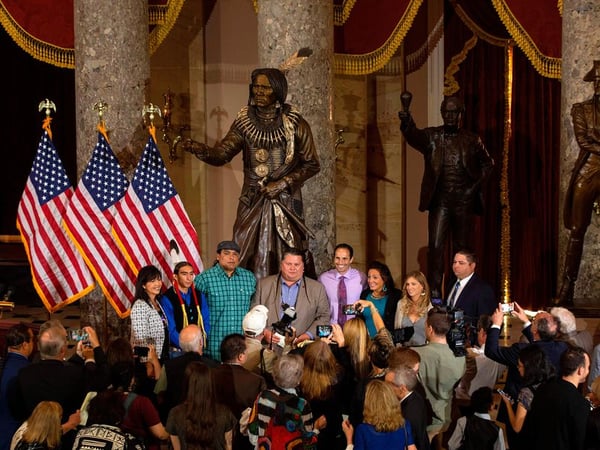 The unveiling ceremony of the statue of Ponca Chief Standing Bear in Statuary Hall on Capitol Hill. Getty Images.

Many Nebraska dignitaries attended the event. Nebraska Governor Pete Ricketts told the crowd Chief Standing Bear's remarkable story. Nebraska Representative Jeff Fortenberry, called the statue, "'breathtaking' and the ceremony 'deeply moving'…it really is about a story of dignity and courage and perseverance. Standing Bear's willingness to stand forth for the essence of human dignity and, in turn, become one of America's great civil rights leaders.'" 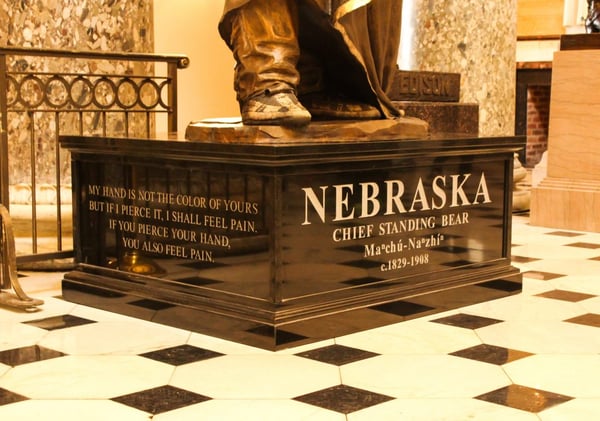