Sharing the Untold Story of Native America is one of the most important things we do at Native Hope, and if Indian Country is to heal, there must be an acknowledgment of the past. This acknowledgment must include the facts. Both sides of the story make up the facts. Unfortunately, American history books are largely written with a colonial bias. It is difficult for most to understand why in America, the land where “Freedom of Speech” is a basic right, textbooks contain passages that explain the relocation of Native Americans as a “willing move from their homelands to make room for the colonists.”

June 25 marks an important day in U.S. history: The Battle of the Little Bighorn, known to Native Americans as the Battle at Greasy Grass and known to others as Custer's Last Stand, 1876. It was a victory for the Plains Indians of the Great Sioux Nation as they defeated General George A. Custer and 276 of his men. As told by American history, the Republic suffered the loss of a valiant hero and his men as the uncivilized Indians massacred them in battle—this, however, is a one-sided take on what happened near the Little Bighorn River in Montana.

Understanding the Battle of the Little Bighorn [Greasy Grass]

To understand this battle means one must peel back many layers, but even then, there will be more accounts, more broken promises, and more tragedies added to its complexity. Over the next few weeks, we will publish a series of articles that attempt to give more perspective into the truths our history books are avoiding.

The fact is the Cheyenne Chiefs American Horse and Two Moons, and Lakota Chiefs Crazy Horse, Sitting Bull, and Gall defeated General George A. Custer and his soldiers. Their effort was strategically and tactically coordinated—it was successful as there were no U.S.Cavalry survivors. Chief Sitting Bull is often credited for this decisive victory. Because the battle was viewed as ruthless by the colonists, the Native warriors, both men, and women, were depicted as “savages.”

According to accounts, there were thousands of Native Americans (5-10K) encamped near the Little Bighorn and General Custer foolishly divided his 700 soldiers into smaller troops of 200-300 men. When Custer made the decision to lead a troop of less than 300 to the Little Bighorn River, he sealed his fate.

The history books called the event “Custer’s Last Stand”—but this band had no chance of defeating its formidable enemy of 1,200+ warriors.

Yes, the Native fighters were fierce. “The engagement was one in a series of battles and negotiations between Plains Indians and U.S. forces over control of Western territory, collectively known as the Sioux Wars.”  Decades earlier, the U.S. and eight Plains Indian tribes signed The Fort Laramie Treaty of 1851 which promised the tribes a sizable piece of land. This land included the Black Hills of South Dakota, sacred land claimed by the Arapaho, Cheyenne, and Lakota. 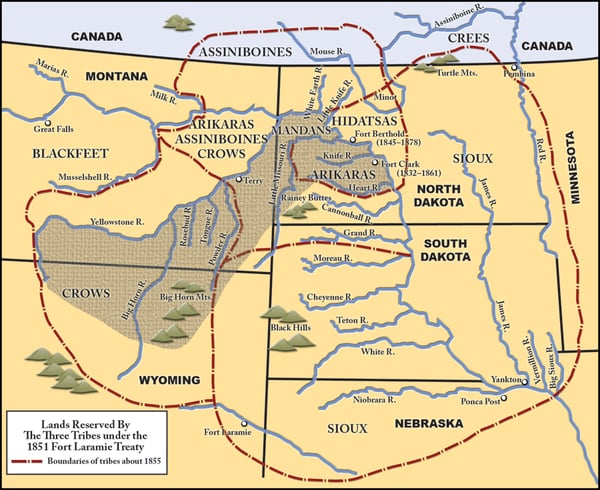 In order to ensure the safe passage of settlers across the Oregon Trail, the U.S. could build Forts that settlers could reach along the way across Indian Territory and the Indians would allow safe passage between these forts.

However, the tribes began fighting amongst each other as the settlers encroached on the Indian Territory forcing tribes further West into one another’s territories in search of food, namely Bison. Battles for land rights ensued among the tribes; this included the sacred lands of the Black Hills which further inflamed tensions among the tribes. Each tribe possessed its own identity with its own land, values, and culture—the U.S. government and its settlers did not consider the tribes’ historical disputes, nor did they care to understand—an Indian was an Indian, and land was land.

Perhaps, the “opening engagement of what would be known as the First Sioux War was the Grattan Massacre, also known to some as the Grattan Fight, August 19th, 1854, east of Fort Laramie (Nebraska Territory which is today Groshen, Wyoming).” A small band of soldiers (28) dispatched to a Lakota village of 4,200 to apprehend a Minniconjou cow thief. The army took it into their hands to handle a situation normally handled fairly and peacefully by the Federal Indian Agent. Something went wrong. “It's said one of the soldiers shot Chief Conquering Bear and killed him on the spot.” Consequently, the Lakota killed all members of Lieutenant John Grattan’s party plus a civilian interpreter.

Word reached President Franklin Pierce, who ordered retaliation and the Indian Wars began. “On September 3rd, 1855, a unit of about 700 soldiers under the command of General William S. Harney was dispatched by the President to avenge the Grattan Massacre. Harney did so by attacking a Lakota village in Nebraska. He had his men kill about 100 warriors, old men, women, and even children—yes, women and children as well. It became known as the Harney Massacre.”

“The lamentable butcheries of Indians by Harney’s command on the Plains have excited the most painful feelings,” wrote a New York Times correspondent in an 1855 dispatch from Washington. “The so-called battle was simply a massacre, but whether those Indians were really the same who have cut off emigrant trains with so many circumstances of savage cruelty, or whether it is possible to distinguish between the innocent and the guilty in retaliating these outrages, are points on which we have no reliable information.”

Needless to say, there was trouble in the West. Settlers failed to respect the boundaries set by the treaty, breaking promise after promise. The history of the Westward Expansion was muddied by the discovery of gold in several western territories, which only added fuel to the fire. In 1862, the Dakota Uprising in Minnesota set in motion an even more turbulent decade of Indian-U.S. relations, making American heroes like President Abraham Lincoln and General William Harney enemies of the tribes.

Who won the Battle of Little Bighorn [Greasy Grass]

In 1868, a new treaty deal was struck. It substantially reduced the land afforded to the tribes, but it afforded the Black Hills to the Lakota declaring it sacred ground and vowed to keep settlers out of the region. In 1874, General George A. Custer led an expedition into the Black Hills to determine if the rumors of gold were true. The U.S. government failed to keep the flood of miners and settlers from entering the Black Hills, violating the Treaty of Fort Laramie; this led to the Black Hills War in 1876. The Indians objected to the invasion of settlers and attacked; the U.S.Cavalry led by Generals Custer and Sheridan responded with force. Sheridan ordered the mass murder of the buffalo which would cut off the food supply for the Indians. 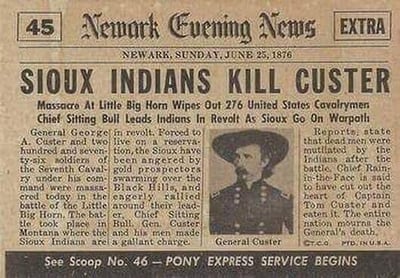 Soon the Plains Indians (the Lakota, Cheyenne, and Arapaho) banded together to protect their sacred lands which place us in Montana in June of 1876. The Indians were wary of talk and planned a defense strategy that would lead them to victory.  Sitting Bull, Crazy Horse, and other chiefs gathered with several thousand followers in southern Montana in the Big Horn River Valley. This was in direct defiance of the U.S. government's orders for all Indians to remain on reservations.

In response, the U.S. government sent three columns of troops to the area to advance a three-pronged attack on the encampment. General Gibbon's led cavalrymen from the east, while General Terry advanced with his men from the west, and General Crooks descended with his column from the north. Crooks traveled with 262 Crow and Shoshone warriors who warned him that the Sioux force in the area was significant. On June 17, the Sioux and their allies surprised Crooks and a battle ensued along Rosebud Creek —  a precursor to the Battle of Little Big Horn. Even though significantly outnumbered, Crooks' men stood their ground with invaluable help from the Crow and Shoshone, while the Sioux retreated.

Just eight days after the Battle of Rosebud on June 25, General Terry warned his troops, including the 7th Cavalry led by Custer, not to attack the Sioux encampment without his word. However, Custer ignored orders and warnings from scouts who spoke of thousands of Indians in the Big Horn River valley. Instead, Custer pressed forward with his unit of 276 soldiers. Quickly, the Indian warriors surrounded Custer and his men. There was no mercy. The Natives outmanned and outgunned the Cavalry; they attacked with a vengeance — littering the U.S. soldiers with arrows, hitting them with clubs, and striking with bullets from Henry repeating rifles, a weapon far superior to the cavalry's single-shot rifles.

As a sign of victory, the Indians took scalps, something their European Colonizers taught them — a practice that would ironically be used to paint the Natives as savage. Among the many great warriors was Nicholas Black Elk who took his first scalp that day at age 13. Indian warriors stripped the U.S. soldiers of clothing and weaponry despite Sitting Bull's orders to respect the enemy and take nothing. The Battle of Greasy Grass along the Little Bighorn River in Montana was over almost as soon as it began.

Victory belonged to the tribes.

Are you interested in learning more about the history of Native Americans? Help us raise awareness by sharing this story and the story of Native Hope with your friends and family!
When you support Native Hope, you are investing in giving HOPE to the voices unheard. 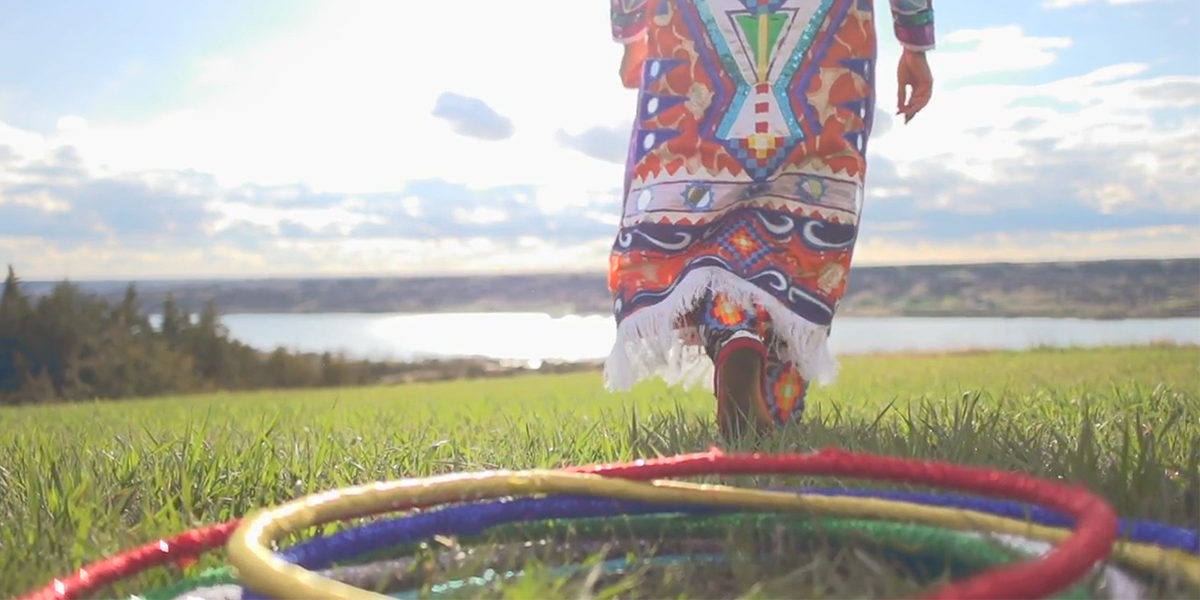 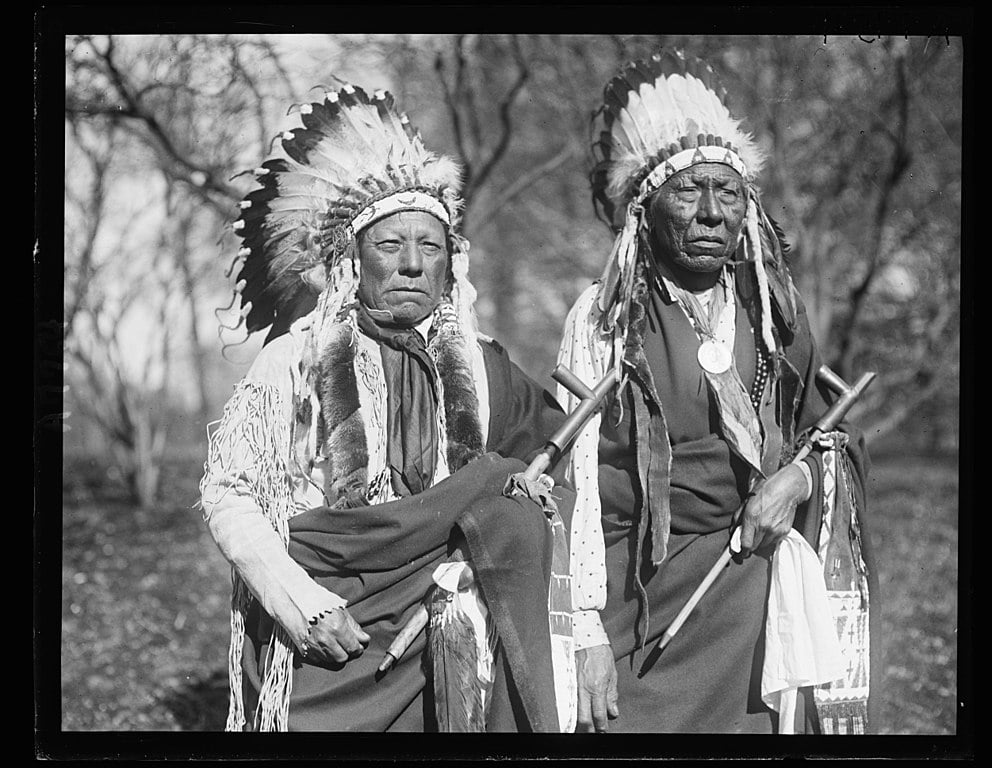