Part II in a series of articles that attempt to give more perspective into the truths our history books are avoiding.

The Indian’s victory at Little Bighorn [Greasy Grass], on June 25, 1876, forced the U.S. to double its calvary in the Plains. The Lakota, Cheyenne, and Arapaho warriors faced insurmountable odds in the years following their Victory Day at Greasy Grass. Their victory was squashed by the massive effort the U.S. put forth to defeat the Lakota and their allies. The Great Sioux War intensified as the U.S. Army rounded up Indians forcing them to live on undesirable reservation lands.

The Little Bighorn Battlefield [Greasy Grass] is now a national monument. The monument’s former National Park superintendent Gerard Baker (1990-1998) was a Mandan Hidatsa Indian from North Dakota, who spent his tenure making the site of the “Last Stand” more meaningful and spiritual for Indian people.

“’This [the Little Bighorn Battlefield] represents the end of the way of life for the Indian people,’ the superintendent, Gerard Baker, said as he gestured toward the battlefield in the rolling hills of southern Montana, which was crowded with tourists...‘When Indian people come here, they cry and get mad for losing that way of life, that freedom. It's something we'll never get back. That's what this place is for.’" 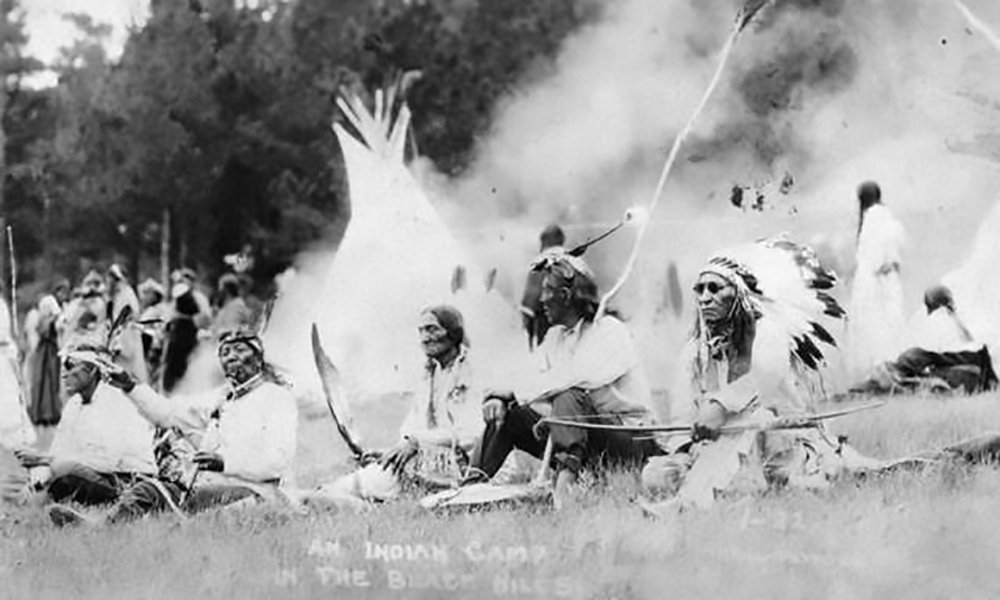 “Loss of that way of life”

Before the Battle of Greasy Grass in 1874, gold was discovered in the Black Hills of South Dakota, some 330 miles southeast. Custer laid claim to the discovery. This brought miners and prospectors to the area. The U.S. government constructed roads and railroads within the Great Sioux Nation breaching the 1868 Fort Laramie Treaty—this breach sparked several conflicts with Custer and the U.S. Cavalry.

When the Sioux and their allies defeated Custer and members of the 7th Cavalry, there was a call for swift retaliation. Two months later in August of 1876, the U.S. enacted “Sell or Starve” which withheld promised food rations from the tribes that defeated Custer and his men. The U.S. wanted the Black Hills—its gold and other resources. After suffering and starving, the Lakota relinquished their claim to their sacred lands: the Black Hills [Paha Sapa]. The Act of 1877 was another breach of the 1868 Fort Laramie Treaty. A Congressional Act forced Indians onto reservations and the U.S. federal government took ownership of the Black Hills.

Within the next few years, the Lakota and neighboring tribes faced the genocide of their culture, traditions, land—everything was gone. Sacred places like Wind Cave, Devil’s Tower, Black Elk Peak, and Six Grandfathers Mountain (now Mount Rushmore—named after a wealthy NY lawyer in 1885) were now in the hands of the Euro-Americans. This was devastating.

The story behind Mt. Rushmore

The Six Grandfathers (Tȟuŋkášila Šákpe) was named by Lakota medicine man Nicolas Black Elk after a vision. “The vision was of the six sacred directions: west, east, north, south, above, and below. The directions were said to represent kindness and love, full of years and wisdom, like human grandfathers.” The granite bluff that towered above the Hills remained carved only by the wind and the rain until 1927 when Gutzon Borglum began his assault on the mountain.

In the 1920s, South Dakota state historian Doane Robinson saw the Six Grandfathers as an opportunity for the state of SD to increase tourism through the Black Hills area. The controversial sculptor Gutzon Borglum was hired to create a sculpture “to honor the West’s greatest heroes, both Native Americans, and pioneers.” Borglum wanted a Nationally significant monument and convinced the SD state historian to use the faces of U.S. notable presidents.

For 14 years, Borglum blasted, chiseled, and filed the faces of George Washington, Thomas Jefferson, Theodore Roosevelt, and Abraham Lincoln in the granite bluff. For the Lakota, this was just one more violating act of colonization. While these presidents were leaders of the United States, each with notable historical significance, their faces on a sacred mountain was a final act of conquest. Washington and Jefferson owned slaves. Roosevelt coined the phrase: “the only good Indian is a dead Indian.” While Lincoln, on the day after he signed the Emancipation Proclamation, ordered the execution of the Dakota 38+2 at Fort Snelling in Minnesota.

Needless to say, Mount Rushmore [Six Grandfathers Mountain] is known as a shrine to democracy. Its image is synonymous with freedom and patriotism; however, the other side of its story demonstrates the lack of understanding and respect shown to the Native people who inhabited Paha Sapa for generations before European arrival.

Gerard Baker became the first Native American superintendent of Mount Rushmore in 2004 (2004-2010). In his acceptance speech at the monument, Baker explained that the choice to take the helm at Mount Rushmore was a challenge. He cites that the narrative shared by the National Park Service only outlined the first centuries of America and the four presidents. 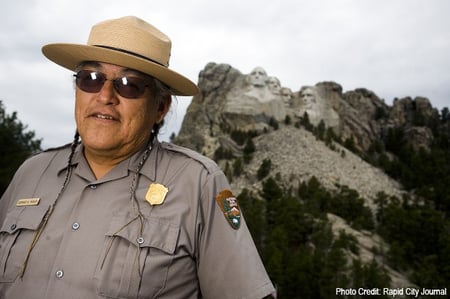 “And this is a challenge for me because I believe that we should go back before that time. I want to show what life was like before George Custer found gold in the Black Hills, before (Gutzon) Borglum came in and started carving the sculptures here,” he said.

That is exactly what Baker did. He erected a teepee at the monument. One day he saw 20-30 visitors standing around the teepee—many asking each other about the structure and its purpose at Mount Rushmore. Gerald took this as an invitation to educate the group. He spoke about the history of the land and the people, soon the group grew to a crowd of nearly 200. The simple placement of the teepee started what today is the Heritage Village where the traditions and customs of the Native people are highlighted.

"It's not just a teepee here," Baker says. "We're promoting all cultures of America. That's what this place is. This is Mount Rushmore! It's America! Everybody's something different here; we're all different. And just maybe that gets us talking again as human beings, as Americans."

As we look forward to this Independence Day holiday weekend, let us reflect upon the Untold Story of Native America. We must understand the true history of this great nation in order to move forward together as a nation of men and women who are created equal.

When you donate to Native Hope, your gift goes towards raising awareness of the injustice done to Native Americans and providing for those who need it most. Through our Community Outreach, Mentorship and Fellows we can positively impact Indian Country. 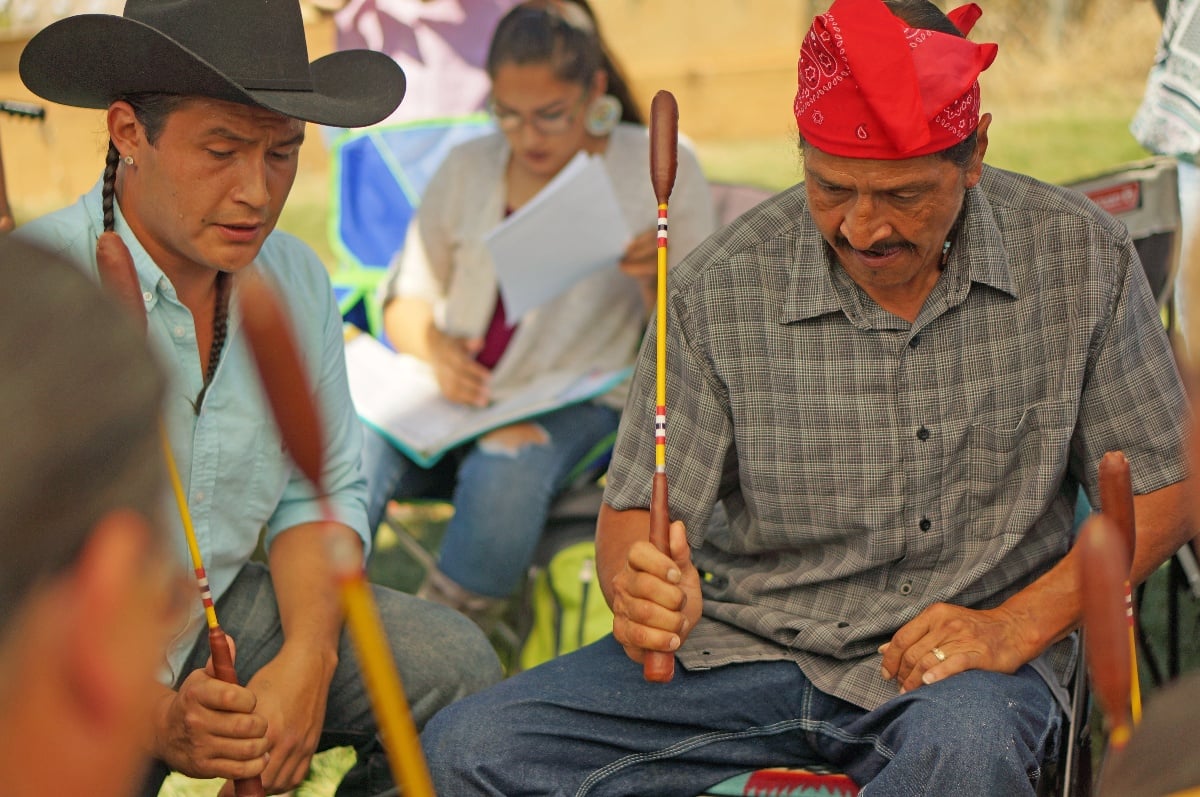