The Power of One

All of us have scars from our battles. Some of those scars are deeper than others. These scars display our struggles openly to the world.

Julie Richards (Julz Rich) bears those scars: the scars of abuse, addiction, and absolution. But when her own daughter started using meth, she suffered the ultimate scar to her heart. Julz’s scars reveal her journey, but her tattoos also tell more of her story.

Wearing her heart on her skin

A wolf, the American Indian Movement insignia, and a cross inked on her arm project the pride Julz holds for significant aspects of her life: her school, her family, and her great, great grandmother. Her tattoo of a butterfly floating above a rose lifts her spirit when she is low.

The wolf tattoo reminds Julz of her great, great grandmother, Susie Shot-in-the-Eye, who followed wolves by night from Canada to reunite with her people. Susie named her son High Wolf. Julz knows that without the wolves, her heritage would have been very different.

As a result of her lineage and the warrior spirit that runs deep in her family, she grew up participating with her family in the American Indian Movement and admits that she is an activist. Julz believes in fighting for a cause—it has always been her way of life.

The cross tattoo adds an interesting twist to her persona. It represents the school Julz attended from first through eighth grade. She credits the school to saving her life.

“Without my time there, I would have endured abuse at home,” says Julz.

For Julz, her scars and tattoos serve as reminders of the struggles she has battled and causes for which she has fought.

The sacrifice and vision

Eight years ago, Julz’s son was doing a Sundance, and she decided to join him.

Participating in a Wiwanke Wachipi, Sundance, is about sacrifice of self for the good of all. It is still the most important ceremony practiced by the Lakota. 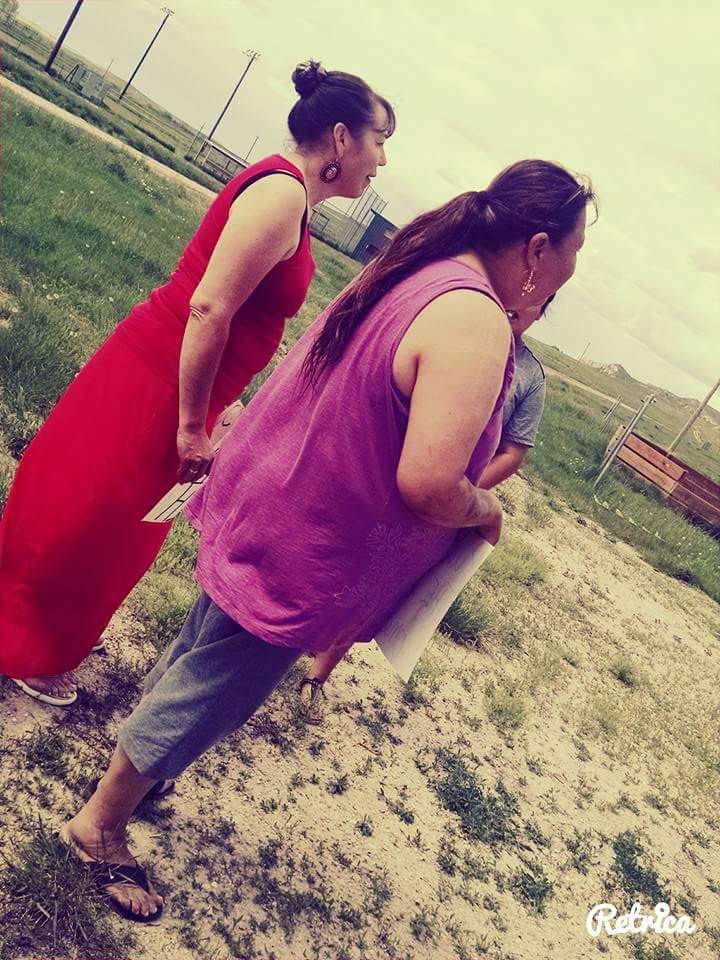 According to Chief Fools Crow, Lakota holy man and intercessor of 75 Sundances, “The ceremony filtered out those who were serious about sacred vows from those who were not. It is the willingness to sacrifice for the people which is paramount...It is about personal sacrifice and the unselfish act of giving of one’s self.”

If her son was ready to give of himself, Julz decided that she was, too.

Julz explains, “The Sundance is an act of suffering and a personal sacrifice: a giving of myself to the people so they will not have to suffer. It is for the kids, so they can live a better life.”

An integral aspect of the Sundance is the piercing of the dancer. This is different for men and women. Men experience a piercing of the chest, while women are pierced in the arm. Each piercing will create scars that serve as a reminder of the ceremony and its teachings.

As a result of her experience, Julz realized that her people needed her to take on the fight against meth, drugs, and alcohol.

In order to save the people on her reservation from the devastating effects of meth, Julz formed the Mothers Against Meth Alliance, M.A.M.A. She has stepped up her movement by employing her children and grandchildren in the effort. She holds rallies and marches all over the reservation; she gives interviews, speeches, and presentations whenever and wherever she can. 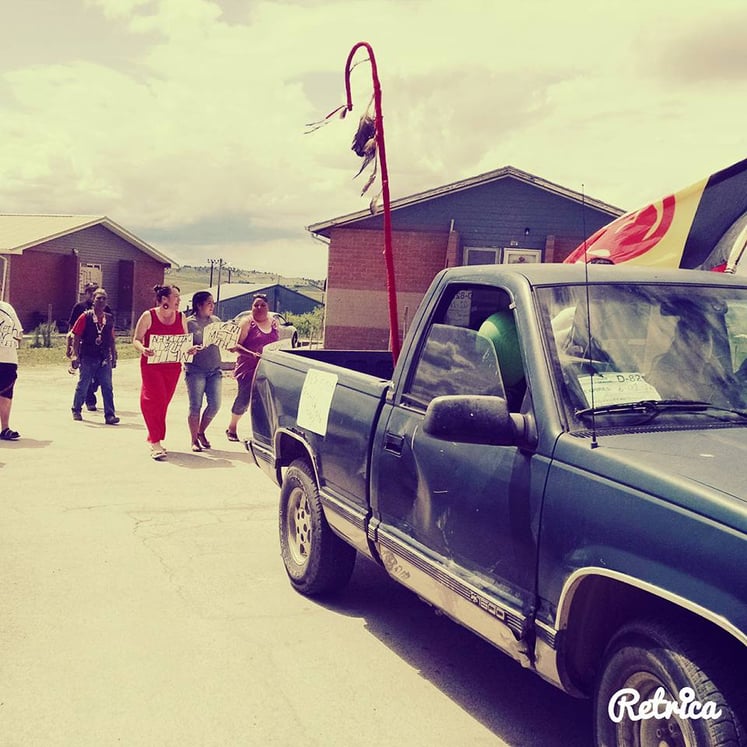 If everyone on the reservation can find their way out of denial, then they can defeat the use of meth and other drugs. “Denial is our biggest enemy,” explains Julz. She believes everyone needs to stand up and fight.

“Many children are being left behind because of meth and its hold on their parents.”

Before M.A.M.A., Julz had never spoken in front of a crowd. She shakes her head and gives a huge sigh, “When you can tell your story without tears, you know you have healed. I am healed.”

Her son, Jon Jon, adds, “Every time my mom speaks, it gets more and more powerful, and it opens my eyes—a lot of people’s eyes.”

Jerica, Julz’s daughter, also speaks at events and openly discusses her mistakes with the drug, telling her experience to others to show them the dangers of meth.

Jon Jon and Julz’s youngest daughter, Francine, join in the effort by going on patrol with their mother and by proudly displaying the handmade posters that carry their message:

Julz uses Facebook, messaging, and phone calls to communicate her vision, and many people are responding to the M.A.M.A movement. “We have some awesome allies of all creeds and colors, and we’re fighting in solidarity,” Julz affirms.

Native Hope’s programs and partners are fighting this battle with Julz. Please consider giving a monthly donation of $10, $20, or more. 100% of your donation helps fund vital programs that provide training, safety, and a way out. 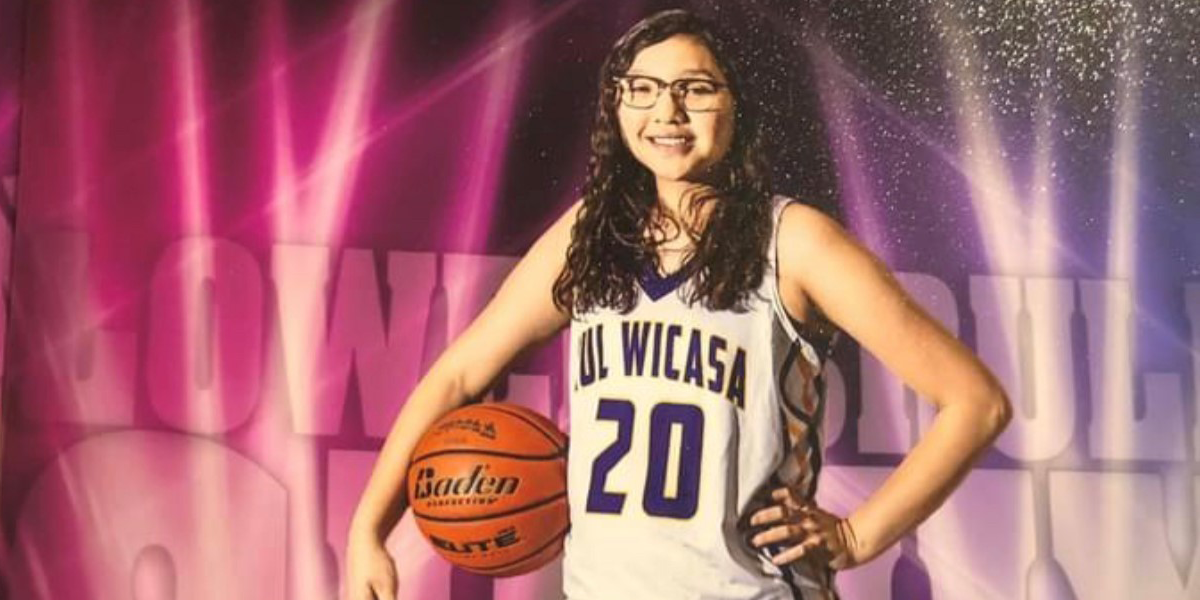