Purity in Pine Ridge: The Native American Bow and Arrow

However, Native Hope knows that Pine Ridge is so much more. Surely, there is poverty, but amidst the despair is beauty, dedication, spirituality, unity, and purity.

The Oglala who reside on the reservation hold culture and its protection as key to their survival. Richard “The Bowmaker” dedicates himself to the preservation of the art of bow making and the value it holds for his children and his people.

“There is a lot of good here,” Richard affirms. “There is a very strong spiritual community. The Lakota people have really kept their traditions alive. Wild Oglalas stick to tradition.”

Why Do the Lakota Treasure the Bow and Arrow?

Bow making was a gift from the Thunder Beings, the Wakinyan—the good spirits, guardians of truth and protectors of the tribes. This gift enabled the Lakota to hunt the buffalo. It was a gift that elevated them and gave them greater sustainability.

For Richard, the gift of the bow making is something he wants to pass on to the next generation. It is an art that takes patience, purity, and respect.

Richard explains in his calm and reverent manner, “I didn’t go searching for it [bow making]. My younger brother said, ‘Richard, do you want to make a bow?’”

He reflects, “I said, ‘Sure,’ and since then, it has been an addiction.”

This addiction is a positive distraction from the greed and fear found in the world today.

Over the five years Richard has been handcrafting bows, he has constructed over 100. For him, it is all about the process and its teachings.

Making a Traditional Bow and Arrow 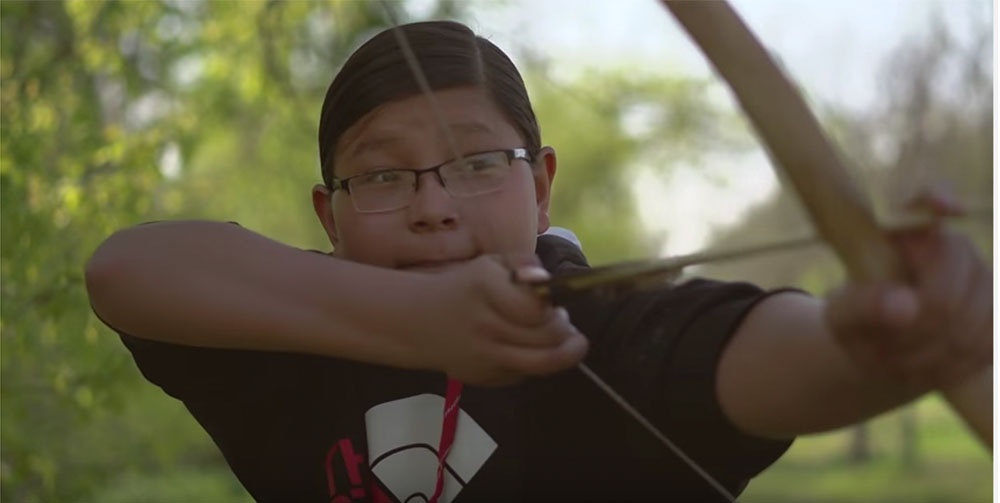 First, he finds the perfect sapling for a bow. For this, he need not go far; literally, Richard can step out his back door. The Pine Ridge landscape provides an ample supply of ash, chokecherry, and iron wood.

The trees speak to Richard either through their shape or stature. After he chooses a tree, he blesses it with tobacco before chopping it down. He believes if he takes something from Mother Earth, he should return the blessing. This is a process called zeroing.

The wood must season before it can be formed into a bow—this may take anywhere from a month to two years. Thus, in his home several pieces of wood await their rebirth.

“I can...shave it [any piece] down to bow dimensions,” says Richard, “or the shape already presents itself—that's why one must study each potential piece of bow wood carefully.”

As he gently considers the wood standing in front of him, he begins rasping or scraping it, using various tools: flint rock, lava rock, quartz, and sandstone. He follows the growth rings because he wants to balance the limb. He softly smiles and jokes, “People tell me I am rasping my life away.”

Looking down the shaft, he checks his work. He does so only by sight and touch.

Bow Making Is a Spiritual Journey

This is a spiritual journey for Richard who develops a connection with each work of art. Although he could easily sell his bows, he doesn’t charge people for his work, but if he is offered compensation, he will accept. For him, bow making is not about the money.

“These bows might be around for my grandchildren,” he says. And that is the hope. He hopes that the bows he has made will empower the next generation to stay focused on the purity of what it means to be Lakota. “Having a child is more than feeding and clothing them,” he continues. “It’s about teaching them the ways.”

Native Hope celebrates Richard’s quiet leadership and his vision of the bow shooting new life into a people who are searching for a way to make their voices heard.

Help preserve traditional customs of the many Native American tribes.

Learn more from our resource–Reflecting on Our Foundations.

Connection and Empowerment for Native People: The Teachings of the Bow and Arrow