People claim to “be there” for the 1 in 5 who suffer from mental health issues. However, those who suffer, particularly from multiple layers of trauma, feel alone a majority of their days. The reality is “there isn’t a light switch that can be just turned on and off. Even after visiting with those I care about, I still go home to my thoughts—it just doesn’t stop,” explains Dennis.

He suffers from anxiety, depression, PTSD, and as a Native American—most likely, historical trauma. For many, like Dennis, healing from childhood trauma in adulthood is a major hurdle: “I grew up thinking the abuse was normal.” According to the National Alliance for Mental Illness [NAMI], “46.6 million people experience some form of mental illness.” 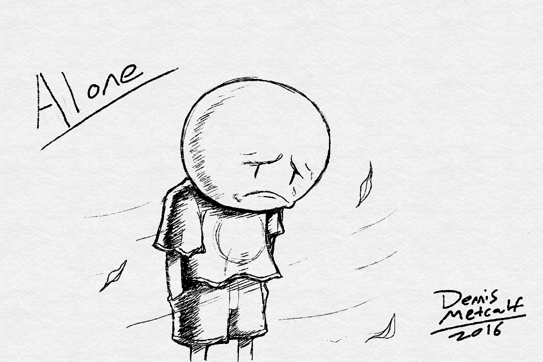 Since 1949, May has been dubbed Mental Health Awareness Month; first by Mental Health America; now, dozens of organizations worldwide mark the month. NAMI’s 2020 campaign reads “You are Not Alone—now more than ever, we need to find ways to stay connected with our community. No one should feel alone or without the information, support, or help they need.” Unfortunately, with the onslaught of COVID-19, this number is skyrocketing due to the effects of isolation—in April, the “federal government’s disaster distress hotline had a 1,000% increase in calls.” 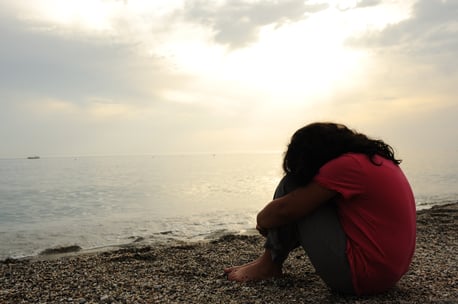 Ever since the colonization of North and South America, the Native people have suffered, mentally and physically. One of the tactics used to bring the indigenous people “in check” with the colonists’ ideas was to isolate the tribes or bands of people. Through the use of the reservation system and federal boarding schools, the colonists effectively kept tribes apart for years which slowly dismantled traditions, languages, and cultures.

“When we were growing up, we used to play ‘cowboys and Indians’…we used to fight over nobody wanted to be the Indian…I didn’t think about that. We’d all play, and I’d always suck it up and be the Indian,” he told her.

“But how ironic is that—for a bunch of Indian children to be playing, and NO ONE wants to be the Indian?”

“Why did no one want to be the Indian?” she asked him.

“Because everyone knows the Indian dies,” he said.

The destruction of culture began early and continues today as many Native children still receive the same message as Dr. Gourneau’s father: “That it is NOT good to be Indian.”  She adds, “I received the same message.”

The historical trauma definition: "Cumulative emotional harm of an individual or generation caused by a traumatic experience or event. Historical Trauma Response (HTR) refers to the manifestation of emotions and actions that stem from this perceived trauma." In short, experiences shared by the same culture, the same community, and the same family are passed down through generations, resulting in deep psychological wounds. These wounds lead to substance abuse, addiction, sexual violence and abuse, and overall family destruction. 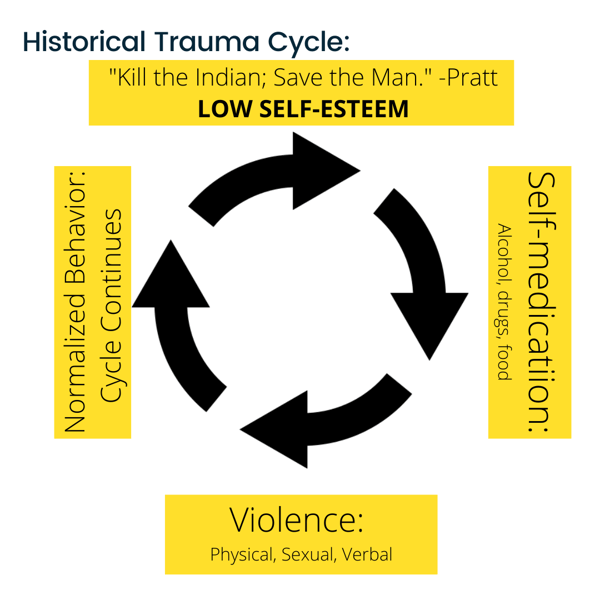 How did this happen?
After the Native Americans were “contained” to reservations, there was a necessity to make them fit to live in America. Mary Annette Pember explains in The Atlantic, “…March 3, 1819, the Civilization Fund Act ushered in an era of assimilationist policies, leading to the Indian boarding-school era, which lasted from 1860 to 1978. The act directly spurred the creation of the schools by putting forward the notion that Native culture and language were to blame for what was deemed the country’s ‘Indian problem.’”

In her article, Mary Annette recounts her mother’s struggle with the demons that haunted her after attending boarding school at  “Saint Mary’s Catholic Indian Boarding School on the Ojibwe reservation in Odanah, Wisconsin—“Sister School,” a world ruled by nuns clad in long black robes.” Mary’s mother, Bernice, was never free of the abusive effects of the nuns. There are scars from these wounds that for centuries have festered under the surface, allowing for it to inspire devastating coping mechanisms (as mentioned above). 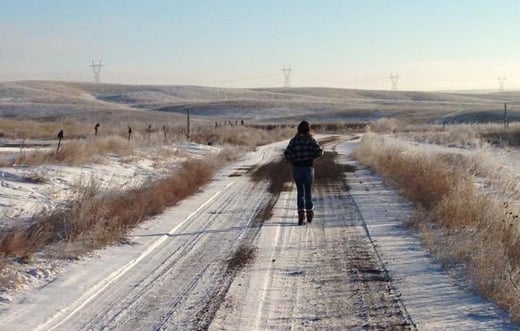 Is there healing from historical trauma?
It is hard to say. Many experts agree that healing centuries of suffering is more than a challenge. Cultural practices must be at the heart of this healing, which means culturally competent providers are key. Those providing healing must learn all they can about historical and intergenerational trauma to help deeply-seeded wounds—historical trauma must be recognized as “real.”

Communities must be willing to form partnerships and work together. Community members must be willing to speak up and express what they are feeling. When people recognize pain and suffering beyond their control and that others are experiencing the same feeling, real strides can be made.

What forms of healing are working?
In Native communities across the nation, cultural healing support groups work to educate members about historical trauma and its intergenerational effect. People address the source of their trauma and gain coping strategies within a group of people, all aiming for the same goal.

Others, like Haley Laughter, the founder and CEO of Hozho Total Wellness, are on a mission to help Indigenous people heal through the conscious physical movements of yoga. Haley’s journey of healing through yoga unleashed new and positive energy within her that inspired Haley to share the healing gift of yoga with others. In 2016, she founded Hozho Total Wellness, a mobile yoga, and meditation studio that is based on Navajo teachings about holistic wellbeing.

Traditional counseling has helped Dennis express his struggles. “It allows [me] to vent and get professional advice or just to talk and alleviate stress by talking about what makes [me] happy.” But Dennis also feels that mental health isn’t about letting others solve the issues for you—"it requires you to try and help out because it’s you that you are bettering and you have to learn to take care of yourself.” 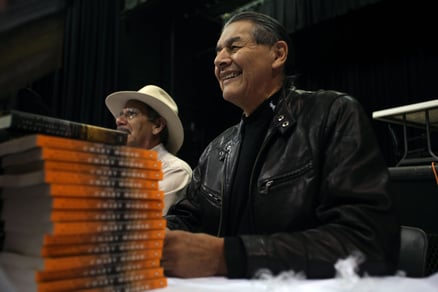 Joseph Marshall, III, renowned author/storyteller, believes the healing power of storytelling is instrumental to restoring Native people to a healthier lifestyle both mentally and physically. “Our stories, our ohunkakan, can heal us by reconnecting us to our culture. There are people such as Mary Louise Defender, a Hunkpapa, and Duane Hollow Horn Bear, a Sicangu, who are repositories of stories, and there are others less well known but who know the stories. They are the new healers because they know the stories,” acknowledges Joseph.

Can we be there?
Let us remember that mental health must remain a focus for all Native communities. Historical trauma has deeply impacted the health of far too many. Moreover, COVID-19 has increased the need for our attention for those suffering from mental illnesses such as depression, anxiety, and suicidal thoughts. This is a fight to heal a people. Remember that they often feel alone. Let's truly be there.

Native Hope supports the efforts of those fighting to improve Indian Country.