“Something good must come out of this. All it takes is one more time, one more try, one more prayer,” offered Gifford Standing, recovering meth addict.

It is this type of thinking that Lower Brule Drug Court graduate, Jason Goodface needed in order to opt into the program. Participating in Drug Court was not an easy decision for Jason—first he had to want to be sober. “I wondered, who are these people telling me how to live my life?” Jason admitted. “I had to find my higher power in order to see who they [the Drug Court team] were…they wanted a better life for us [my family].”

Prior to participating in the Lower Brule Drug Court, Jason Goodface sat in the same position that many of the inmates were in on February 19, 2020, when Judge Lorrie Miner welcomed recovering meth addicts to speak with the female and male inmates. Part I of this blog features speakers Gifford Standing of Fort Peck Sioux Tribe and Jaime Spears of the Standing Rock Sioux Tribe. In this chapter, Wanbli Meter of the Cheyenne River Sioux Tribe and Christine Obago of the Crow Creek Sioux Tribe offer their journey through recovery as a message of hope and resilience.

Wanbli Meter opened his story by explaining that he was the son of an alcoholic father and a co-dependent mother; however, he thought of himself as a hero. “I was an honor student, did everything right,” he explained. But in reality, he was a child trying to take care of children, his siblings, something experienced by far too many on the reservation. “The weight of the world gets hard,” he added. “I played this part for 17 years.”

It was at age 17 that his world changed. “My junior year my girlfriend was pregnant. I couldn’t handle that everyone was mad – we felt alone. I couldn’t handle it. I started drinking, smoking pot.” Wanbli graduated and tried college, but it interfered with selling drugs and getting high, so he quit school. 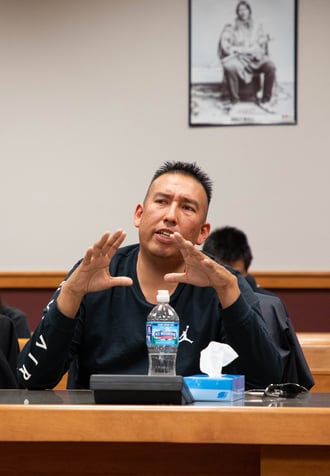 Wanbli and his girlfriend were functioning addicts and were toxic for each other, but it was easier than being alone. Because Native Americans are family orientated, he had a lot of support and sobered up for 18 months, but in 2014, he hit the slippery slope—he found meth. “I let everyone else take care of my responsibilities. One day, I just left for 2 weeks; then on Easter Sunday, I went home at 4 am. When my daughter saw me, she cried, but I slept,” Wanbli said while shaking his head in disbelief.


He had no intentions of wanting to change. Eventually, he was charged with “intent to distribute” and landed in jail where he spent 3 months. Wanbli was presented with the option of going to a treatment center. “In my mind, I had already been in jail, treatment was 9-12 months, so I thought prison might be better,” he acknowledged. “I didn’t want to change.” But the scared look on his daughter’s face, when she heard he faced 25 years, made him choose treatment.

“Somewhere along the way you need to heal," Wanbli looked at the inmates listening to him and explained, "you can’t get into phase 2 without going through your emotional traumas. You have to empty the trash cans. Opening up allows you to let go. [Then] your past no longer hinders you—it doesn’t hold you back. You learn to move past it.” Like Wanbli, all of the speakers emphasized the value in telling their story, owning it, so they could heal and walk the Red Road.

“Getting home is never easy,” Wanbli continued. “The old people, places, and things will always be there.” When Wanbli returned home to Cheyenne Eagle Butte, immediately, people wanted him to sell for them, but he knew he needed to change. “If you are ready to pick up the pieces and you’re willing to take responsibility, you can do it!” The inmates listened intently with tears streaming down most of their faces. He continued, “What are you going to do with your life when it’s your chance? Everybody is waiting for you. Surround yourself with the right people.  Be a family, be a father, be a son. It doesn’t stop here.” He glanced at his fellow speakers, “We are all praying for you. We were all in your position at one time.”

...There was a pronounced pause in the room...

Then the final speaker, Christine Obago spoke, “I see some of you are crying. Tears are sacred. We all share pain. We all share trauma.”  She went on to share that she, too, had grown up in an alcoholic family. She was raped at 4 years old. She was a survivor, a victim. However, Christine wanted the inmates to know that those things no longer define her. “That’s not whom I am. We are not the scars nor the stories others tell.”

Christine, a mother and wife, shared her the journey of her recovery from 13 years as a functioning meth addict. In 2014, when she was the Tribal Hall janitor, a new Tribal Council took over and they tested everyone working for the tribe. “I was positive for THC and Meth,” she admitted. “I turned in my keys. Meth keeps us isolated.”

Her sons had grown up with addicted parents. She went home on that Thursday and admitted to her son that her “pee was hot.” The boys all had questions for her: “What are you gonna do?” “What happens now?” Christine didn’t know, but she knew she had to figure it out.

She talked with her husband, who also used, “We have to quit together or we walk away from each other.”  Christine didn’t go to treatment—she quit. “[It was] an act of God – it was time.” Prior to her quitting, Christine blew all of their money on drugs and skimped on her kids; she wore masks. She went back to her spiritual ways, participating in Sundance circles.

“There is no gray – it is black or white,” she said of quitting. “Finding the power. Saying, ‘I’ve got this.’’ After six months of walking the Red Road, people were still knocking on her door trying to sell to her. “Two years ago, someone knocked and I called the police. I didn’t want this for my sons. I don’t have any masks to wear and that feels good.”

The inmates were overcome with emotion when Christine explained that they needed to learn how to let go of their trauma. “All those tapes playing in your head—let them go. Don’t let them have power. To honor our ancestors, [we must] clean our soul house—let go of what happened…it’s a growing process. It can be done.”

Christine concluded, “I am honored to be here with you. You are NOT alone. Don’t ever think you are alone. Walk strong. Don’t hang onto your bitterness. Find Creator. I had to be my own motivator…Finding the power to choose. My boys and I had a lot of growing to do. I had to tell them it was okay to be mad at me.”

The emotion in the room was palpable. After a moment of silence, Judge Miner noted, “That was powerful, thank you." She then turned to the inmates, “It’s good to cry. Maybe this will help you tell your story and start to heal.”

For those on the journey toward healing

“I am very thankful I had the chance to go through Drug Court because of who I am today. I thank my higher power for putting the Drug Court team in my life.” -Jason Goodface

Native Hope acknowledges that healing is a process. One way of supporting those on the healing journey is to provide the Lower Brule Drug Court with NativeHope t-shirts and personal hygiene bundles for each Drug Court graduate.

Together, we can empower Native Americans and provide them with the basic needs they deserve.