The Ojibwe tribe, also known as the Chippewa or Saulteaux, have historically lived in what's now southern Canada, the northern Midwestern United States, and Northern Plains. Known for their trademark birchbark canoes, copper mining, and maple syrup, they significantly shaped their region for several centuries.

The history of the Ojibwe people is fascinating. Like most other tribes, their story is one of tragedy and conflict—but also triumph, perseverance, and great accomplishments.

The History of the Ojibwe People

The Ojibwe people were primarily located in the Great Lakes region of Western New York, Wisconsin, Michigan, Minnesota, and southern Quebec and Ontario. Uniquely positioned between early French and British settlers, they built relationships with both and engaged in trade and commerce across the region.

Along the Great Lakes, the forests were teeming with game, and the water was abundant with fish. The Ojibwe were able to create a thriving trade economy and enjoyed a healthy lifestyle fueled by the area's natural resources. Fishing, trapping, and hunting provided everything the Ojibwe people needed, plus a surplus they could trade with settlers in exchange for clothing, medicine, guns, and more.

While spread out across a great area, the lakes connected the Ojibwe people, who were able to create a shared sense of identity and community. The Ojibwe people moved westward along the Great Lakes because of a prophecy that they were to go find "the land where food grows on water." This food was wild rice, also called manoomin.

The Ojibwe traveled the lakes in their birch bark canoes, staying close to the water as they migrated and established camps. They relied on fish more than hunting land animals to sustain them on their journeys. 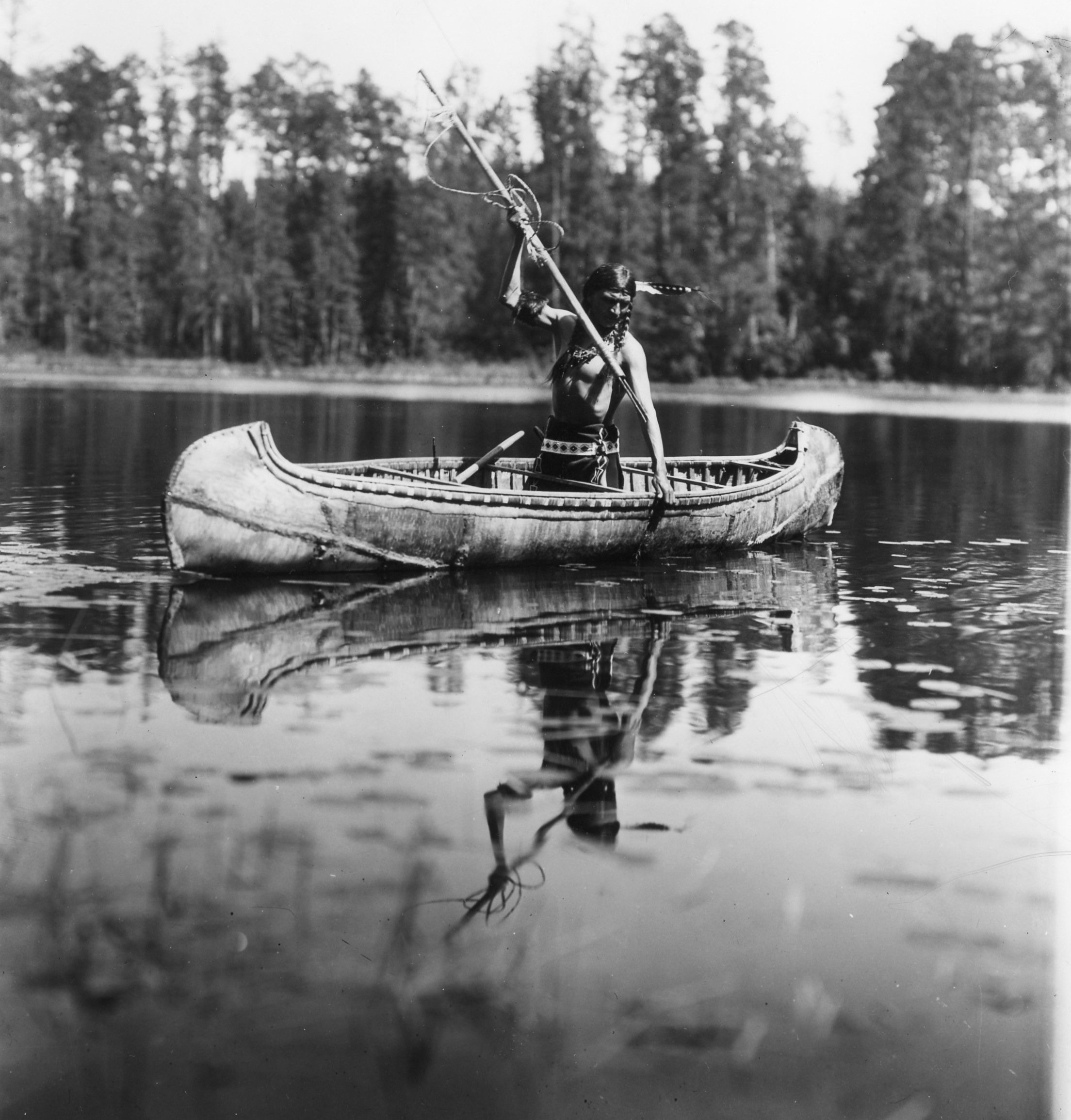 Alliances With Other Tribes and the Council of the Three Fires

The Ojibwe tribe was part of the Council of the Three Fires, an alliance between themselves, the Odawa, and the Potawatomi tribes. These three tribes were originally considered one people, and their unique ethnic identities were developed after the Anishinaabe arrived at Michilimackinac in Michigan on their journey west.

Within the Council of the Three Fires, the Ojibwe were addressed as the "older brothers," and the Odawa tribe represented the "middle brother," with the Potawatomi tribe named the "younger brother."

Treaties and Contention with American Settlers and the United States Government

Like most other Native American tribes, the Ojibwe were forced to sign many treaties with the American government and U.S. settlers. One of the most notable and detrimental treaties for the Ojibwe people was the Treaty of Washington, signed in 1855.

For the Ojibwe tribe living in Minnesota, this agreement added a large part of Ojibwe land to the U.S. government and created the Leech Lake and Millelaces reservations. 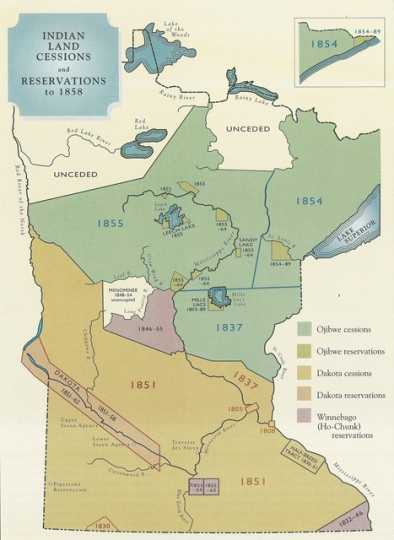 The previous two land treaties (the treaties of St. Peters in 1837 and the treaty of La Pointe in 1854) from the government had already taken most of the Ojibwe land and given payments and goods in return.

Though as in many treaties, the U.S. government benefited the most from the forced arrangements. This left the Native tribes with unfair compensation and unclear treaty terms. These conditions were compounded by the lack of proper representation at treaty meetings and a lack of adequate translation of the treaty itself.

The Treaty of Washington forced the Ojibwe people to shift their food source to mainly agriculture, as the government now owned most of the land the Ojibwe were used to hunting on.

The lack of explicit permission to hunt and fish on their own land within the treaty of 1855 (a clause made clear in the previous treaties) is still affecting Ojibwe today, as they try to hunt and fish according to treaty laws while the state of Minnesota attempts to enforce state laws over the treaty rights.

The language itself is closest to the language of the Potawatomi tribe in its patterns, and it's one of the largest Algic languages by the number of speakers. Because of its popularity and ease in comprehension across tribes and dialects, this language has been used as a trade language.

Ojibwe tribes, like many Native communities, were affected by the Native American Boarding School Initiative, where young Natives were forced away from their communities into schools. These schools attempted to assimilate Natives into Western culture and stripped them of their language, beliefs, and dress.

Yet even with the devastation caused by the assimilation attempts, there are many initiatives to revitalize and reintegrate the Ojibwe language into more of the community and younger generations. From dictionaries to computer learning programs to whole college programs designed around language learning and appreciation, there's a strong desire to rebuild what was stolen from the Ojibwe people.

Etymology and Origins of the Ojibwe Name

Also called Anishinaabemowin, the Ojibwe language calls back to the Ojibwe creation story. "Anishinaabe" means "the Spirit that is lowered from above," "-mo" means "expression through speaking," and the ending "-win" means "the life energy within that which is used to speak." The Ojibwe people are also called "the true people" or "the original ones."

This same term for the language, Anishinaabe, can be used to describe various indigenous people groups in North America or reference the shared languages of the Ojibwe, Odawa, and Potawatomi tribes.

The terms "Ojibwe" and "Chippewa" both come from traits of the tribe itself. They translate to "puckered up" and are thought to refer to the way that Ojibwe people make their moccasins with puckered seams. Another translation seems to refer to the signature birch bark boats of the Ojibwe.

In the summer, the women gathered wild foods such as berries and roots and planted corn, beans, and squash when they could. In the late summer and early fall, the Obijwe harvested rice from the water and land. Ojibwe moved further into the woods in the winter to hunt bigger game. They also implemented ice fishing in the colder months. In the spring, the Ojibwe bands harvested maple sap to make sugar for year-round use. 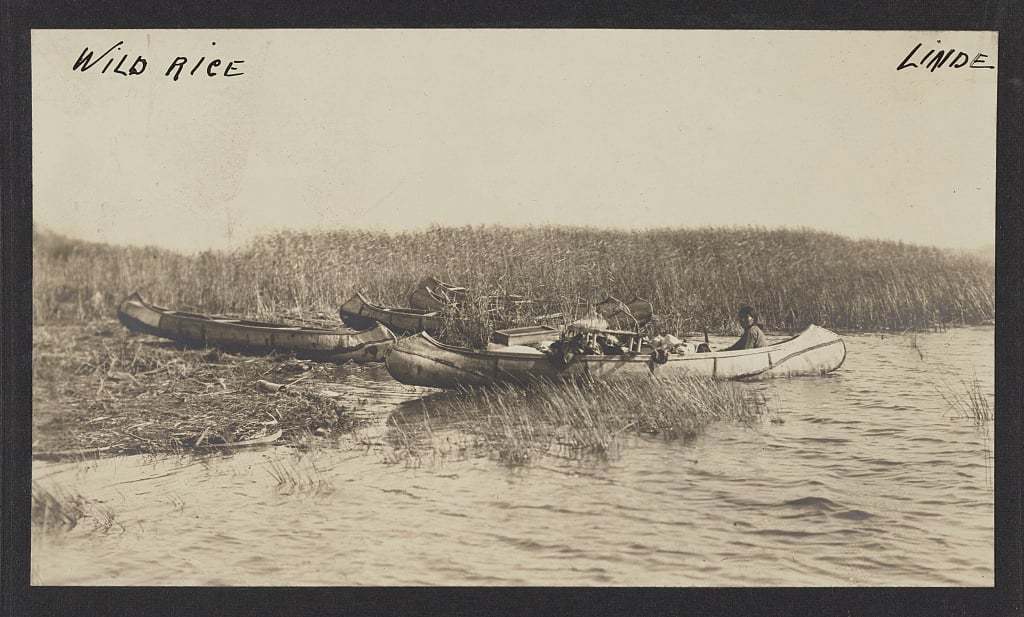 The bands of Ojibwe lived in dome-shaped wigwams and used woven mats and birchbark to secure them. In the summer months, bands would form small summer villages of several families, and all lived and hunted together. In the winter, these groups would disperse so they could move and hunt elusive game more freely. Some bands ranged in size from 20 to 50 people who were related by blood, marriage, or kinship. Clans were designated by what clan the family's father was part of. Usually named after an animal, each clan took care of different responsibilities within community life.

Ojibwe have a culturally-specific form of pictorial writing, which they used in their religious rites. They wrote on birch bark scrolls and on rock. Their pictures conveyed Ojibwe history and geometrical and mathematical knowledge. Much of the ancient writings are considered sacred, so little is known about them outside of tribes.

The Ojibwe have influenced modern culture in many ways, one of which is the presence of dreamcatchers in culture today. According to history, dreamcatchers originated with Asibaikaashi, the Spider Woman. She helped to care for Ojibwe infants and adults. But as members of the tribe moved around North America, it became hard for her to care for everyone.

As a result, Ojibwe women started to make magical webs for their infants to protect them. These webs would catch bad dreams and release them in the daytime, while the feathers at the bottom would let the good dreams be passed along to the children.

While there are still dreamcatchers today, the meaning has been disconnected for many non-native people who buy them, and the authenticity of the objects is lost to mass production in most cases.

Like many other Native tribes, the Ojibwe relied on oral tradition to pass on their histories and beliefs. They told only specific stories in the winter due to their belief that the snakes and frogs were evil and not allowed to listen to stories.

The Ojibwe story of creation picks up at the end of a story where Wenebojo has just defeated evil spirits (maji-manidoo).

After Wenebojo tricks the maji-manidoo, he gets stranded in a pine tree. Water rises to meet him, and by the time he gets to the top of the tree, the water has reached just under his nose. He sees animals swimming around him, and he asks each one to take turns diving down to the bottom of the water and bringing up a little earth so they can all survive.

A loon, an otter, and a beaver all try to help him with his request, but they all drown before they can bring back any dry land. The muskrat goes last, but he passes out as he reaches the surface.

Wenejobo praises the muskrat's effort and mourns his death, but then he realizes he is holding a few grains of sand and a little bit of mud.

Wenebojo brings the muskrat back to life with his breath and then rolls the mud in his hands. He makes a large enough surface for the animals to climb out of the water, and from the small island, he sends a huge bird to fly around the island and make it bigger. After flying around for four days (a magic number), the bird returns, and Wenebojo says the island is still not big enough, so he sends an eagle to make it bigger.

Once the earth is created, Wenebojo decides it is where all his relatives can make their home. He cuts up the body of one of the evil wolves he defeated, distributes it, and makes some into oil or fat. Now the animals can eat meat instead of just grass if they want.

Some animals drank the fat from the evil wolf and are turned into guardian spirits of every Native who fasts. Finally, Wenebojo names all the growing things and lets the Natives know which they can use and how.

Where are the Ojibwe Today?

Ojibwe people are one of the largest tribal populations among Native American peoples in the United States. They also maintain a significant presence in Canada, where they are the second-largest First Nations population. With a population of around 320,000 people, the Ojibwe tribe is still alive and well.

Those living in Canada primarily live in Quebec, Ontario, Manitoba, and Saskatchewan. Those living in the United States typically live in Michigan, Wisconsin, Minnesota, and North Dakota. Each new band has its own history, flag, and government, as well as cultural differences and unique needs.

Ojibwe people are making their impact on pop culture as well, with Care Gee, a stage, film, and television actress, landing roles in Strange Empire and The Expanse. Another famous Ojibwe actor is Adam Beach, known for his roles in Smoke Signals and Windtalkers.

Louise Erdrich joins the work of a lot of Native authors in setting the record of history straight. Her works shed light on her own tribe's history and conflicts with the United States government. Her writing has won two National Book Critics Circle Awards and the PEN/Saul Bellow Award for Achievement in American Fiction.