Today riders embark on the last year of their wintery trek to remember those hanged on December 26, 1862, in Mankato, Minnesota, upon President Abraham Lincoln’s order. This execution served as the U.S. government’s punishment of the Dakota people for their uprising in the Dakota War of 1862. Prior to the execution, the military held 498 Dakota men prisoners for raids on settlers’ villages in the area. Trials took place—trials with no representation, no preparation, and numerous communication barriers. Ultimately, 38 men paid the price for the war in the largest mass execution in U.S. history. Another two men were captured later and hanged as well.

In 2005, Jim Miller of Porcupine, SD, had a dream. He dreamt of riding on horseback across the plains of South Dakota to the riverbank in Minnesota, where, in his dream, he witnessed his Dakota relatives executed. Jim's vision inspired him. He contacted various horse riders to come together for a 16-day reconciliation ride, now known as the Dakota 38 Memorial ride. Each December 10, riders set out to traverse the 330 miles between Lower Brule, South Dakota, and Mankato, Minnesota.

The 1851 Treaty of Traverse des Sioux restricted the Dakota Sioux lands in Minnesota to a strip of land 20 miles wide and 150 miles long; the Dakota endured a tremendous loss of land—millions of acres. The Dakota controlled the area in tan before this treaty, an area roughly the size of the state of New York—woodlands, river valleys, and lush prairies. Again, with more and more settlers pushing their way West, the U.S. government bargained its way into control of most of the Dakota’s territory, reducing their hunting and foraging grounds to almost nothing. All 8,000 Dakota were to survive off the tiny strip left after they sold their land for about .12 cents an acre.

This historical land loss is more profound than the physical land that was lost—it is a loss of sustenance, culture, language, and life itself. By placing a limit on the amount of land and natural resources, indigenous people may “own,” the U.S. government forcibly transformed the Dakota lifestyle from that of a nomadic, self-sustaining people with land-based cultural practices into a more sedentary, dependent, and assimilated lifestyle.

From treaty to the dakota war of 1862

Changes forced upon the Dakota caused starvation, which gave way to anger. Access to hunting and gathering sites decreased, crop failures and payments based on treaties with the U.S. government were delivered late, due to the U.S. Government's priority in funding the Civil War. In desperation and determined to restore ancestral hunting grounds to feed their people, a group of Dakota-led a series of attacks on neighboring settler communities, thus beginning what United States history refers to as the “Dakota War of 1862.”

Several Dakota attacks on settler communities and military forts occurred during the fall  of 1862. Dakota Chief Little Crow explained the cause of the battles to United States Colonel Henry Sibley and said that he [Little Crow] would release the captured settlers if the U.S. addressed the issues. After the Battle of Wood Lake, some Dakotas fled, others surrendered to Sibley. Sibley said he would not punish those who attacked the settlers. The remaining Dakota, the majority non-combatants, were forced to march 150 miles arriving at Fort Snelling on November 14.

A military commission held trials for 498 Dakota men, 303 men were initially sentenced to death. Their crimes ranging from rape to murder in the Dakota War of 1862.  The trial conditions were highly unjust; there were no explanations of the trial process, there were no attorneys for those tried; in fact, some trials were less than five minutes in length. Many Dakota could not communicate across the language barrier, and there was very little evidence presented of the individual crimes. President Abraham Lincoln, personally reviewed the sentences and 38 men were found guilty of war crimes. 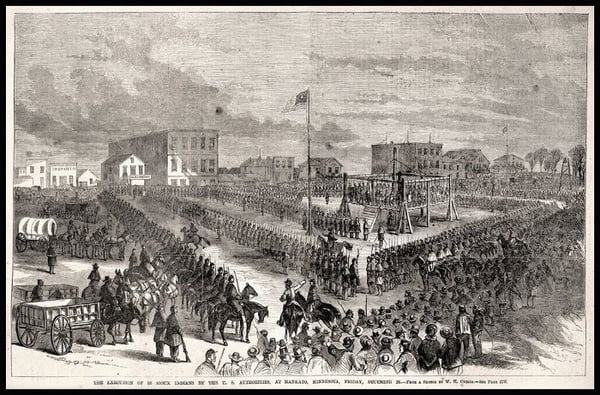 The 38 Dakota men were hanged on December 26, 1862, in the largest mass execution in U.S. history. There were more than 4,000 people in attendance and they cheered when the hangings were done. 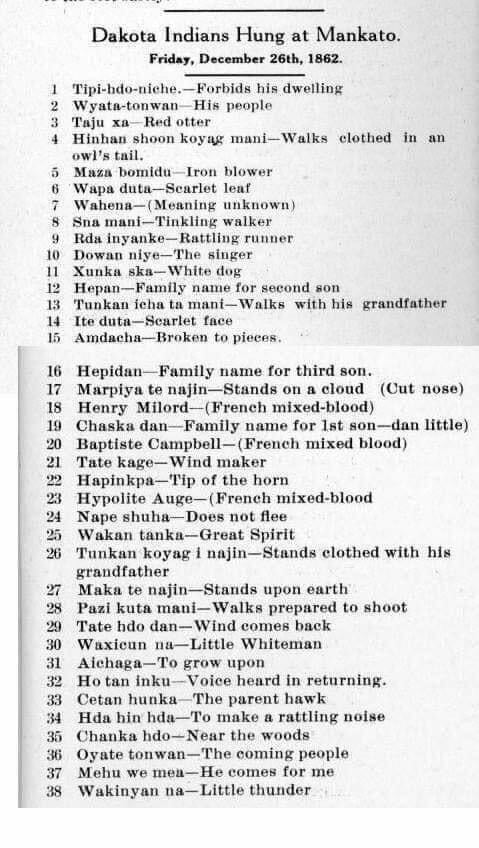 Another two men were captured later and hanged as well.

The remaining 1,600 Dakota, mostly women, children, and elders, remained in U.S. custody on Pike’s Island as prisoners of war. They lived in deplorable conditions, at least 300 died this winter of 1862-1863. In April of 1868, Congress delivered a final blow to the Dakota and abolished their reservation. The Dakota became a people without a home.

Next, the government shuffled the imprisoned around the Nebraska territory. A majority of them headed on a steamboat to Fort Thompson in South Dakota, which would become the Crow Creek Indian Reservation. Most of the men were jailed in Iowa for several years; others went to Santee, Nebraska. Two thousand Dakota women and children faced difficult conditions—often walking for long stretches without proper clothing/shoes. The Ho-Chunk, who had not been part of the war, faced removal, too, as the U.S. took their homelands as well.

The impact on future generations—generational trauma

Trista Gonzales, a member of the Crow Creek Sioux Tribe (Hunkpati Oyate), is a descendant of those held in winter of 1862-1863 in Mankato, Minnesota. She shared the story of her unci, her great grandmother (five times removed), who endured the winter march to carrying a baby—Trista’s great grandmother in her womb. As Trista shared this story, grief for her Dakota relatives unexpectedly overwhelmed her—she wept for her ancestors.

She went on the share details of the journey. The march was brutal. The conditions harsh. Women, children, and elders made their way under the duress of fear. Fear, that if a child cried, a soldier would remove him from the group and kill him with the butt of his gun. Fear that their limbs would not survive the frostbite. Fear of their fate.

Trista’s grandmother survived, and her child lived to be 104—the trauma of their survival lived on as well. When asked why this ride is important, Wilfred Keeble, member of the Hunkpati Oyate and Dakota 38+2 rider, explained, “PTSD (Post-Traumatic Stress Disorder), historical trauma, intergenerational trauma—there are so many words to describe it—it’s more or less the effects of colonization." Most members of his tribe, including Trista, having been coming to terms with just what the past has to do with problems facing their community.