Andrew Jackson, James Monroe, Ulysses S. Grant, Andrew Johnson, Jefferson Davis, Franklin Pierce, Phillip Sheridan, Abraham Lincoln, and James Polk were among the contemporaries of William S. Harney, the U.S. four-star general for which one of the most sacred Native American peaks in the Black Hills [Paha Sapa] of South Dakota was formerly named. In 2020, with heightened awareness around America’s past, these names have been the center of racial discord. The fact is Euro-Americans were embroiled in two distinct wars during the latter half of the 1800s: The Great Sioux Wars with the Plains Indians and the Civil War. Each war centered around the question of freedom—the Civil War, of course, was mostly about the emancipation of slaves and the Sioux Wars were an effort to manage the “Indian problem” during Westward expansion of the U.S.

In 1851, the Plains Indians entered a treaty with the U.S. government, the Fort Laramie Treaty of 1851. The Plains tribes had been warring amongst each other over land rights for years. The Euro-American Westward Expansion caused tribes to seek new spaces as they were forced from their homelands. The treaty ensured the eight tribes: Cheyenne, Sioux, Arapaho, Crow, Assiniboine, Mandan, Hidatsa, and Arikara Nations would gain territorial claims set by tribes themselves, and the U.S. received rights to build roads and forts for settlers moving West, along with a pledge from the Indians for their safe passage through Indian territory. Tribes abided by the Treaty for the most part but conflict would soon find them as settlers were increasingly flocking to the area with news of gold and other resources.

Native Americans fight for their land

Perhaps, the “opening engagement of what would be known as the First Sioux War was the Grattan Massacre, also known to some as the Grattan Fight, August 19th, 1854, east of Fort Laramie (Nebraska Territory which is today Groshen, Wyoming).” At Fort Laramie, a military post for the Indian Wars, Lieutenant John Grattan, an eager, young West Point graduate, begged his superior, Lieutenant Fleming—one year his senior—to be dispatched to a nearby Lakota village of 4,200 to apprehend High Forehead, the Miniconjou Sioux [Cheyenne River] who had “stolen” a settler’s cow. High Forehead was seeking refuge at the Lakota encampment with Chief Conquering Bear, a respected Lakota chief. Normally, the situation would have been handled fairly and peacefully by the Federal Indian Agent with a trade of livestock [mule], which was actually suggested by Chief Conquering Bear, but the agent was away. Grattan was eager for a confrontation, and Fleming agreed to the request.

Lieutenant John Grattan left with a Sioux interpreter and 29 enlisted men; they were armed with “two 12-pounder howitzer and one a mountain which they rolled into the Brule village and aimed them at the lodge of Conquering Bear.” There are several accounts of what happened next, but it seems a musket was fired and an Indian was killed. After that, it didn’t take long to kill Grattan and his men as they were surrounded—there were no survivors. Chief Conquering Bear was also a casualty of the conflict.

President Franklin Pierce vowed retaliation and appointedGeneral William S. Harney to “whip the Indians.” The expedition was deployed in August of 1855 and “on September 3rd, 1855, a unit of about 700 soldiers under Harney’s command. He sent Lt. Col. Philip St. George Cooke and Captian Henry Heth to flank a Sioux encampment along the Platte River [Blue Waters]. Harney pressed into the village and demanded the men responsible for the “Grattan Massacre,” but the Lakota Chief Little Thunder refused as he felt the murders were justified. Soon, Sioux warriors discovered Cooke and Heth’s men. Fighting broke out. Many Sioux women, children, and elders hid in caves along the river. Harney swiftly ordered his party to fire into the caves, killing nearly 100 Sioux—mostly women and children. The tipis were looted and burned, and seventy were taken prisoner by Harney in the “Battle of Blue Waters” (Battle of Ash Hollow). 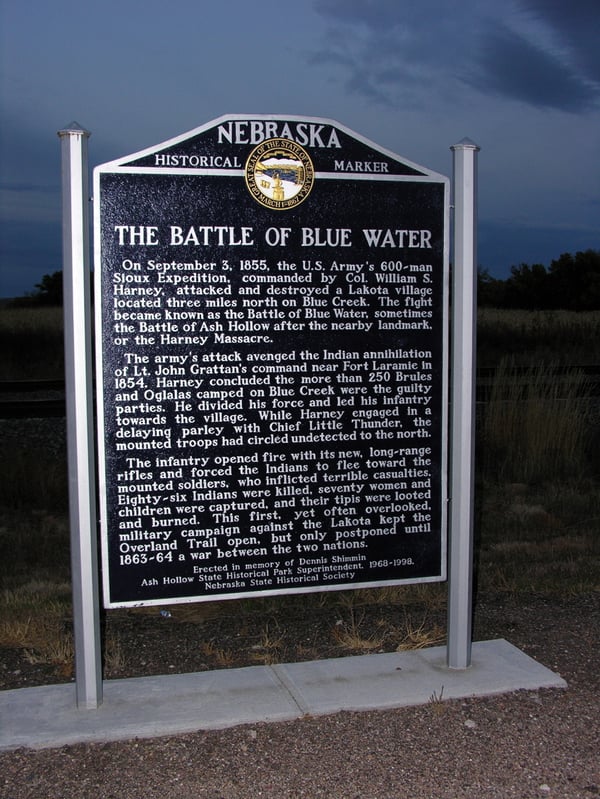 To the Sioux, the battle became known as the Harney Massacre—naming Harney “the Butcher” for the slaughter of their people and “the Hornet” for invading their land. A New York Times correspondent in an 1855 dispatch from Washington reported of the event: “The lamentable butcheries of Indians by Harney's command on the Plains have excited the most painful feelings. The so-called battle was simply a massacre, but whether those Indians were really the same who have cut off emigrant trains with so many circumstances of savage cruelty, or whether it is possible to distinguish between the innocent and the guilty in retaliating these outrages, are points on which we have no reliable information.”

After Harney’s onslaught, one member of the military expedition suggested that the highest peak in the Black Hills [Paha Sapa] be named after Harney. The highest peak is nestled among the Needles and Cathedral Spires near Sylvan Lake of Paha Sapa—The sacred peak was known to Lakota as Hinhan Kaga (Making of Owls) and is named so as this formation resembles owls. 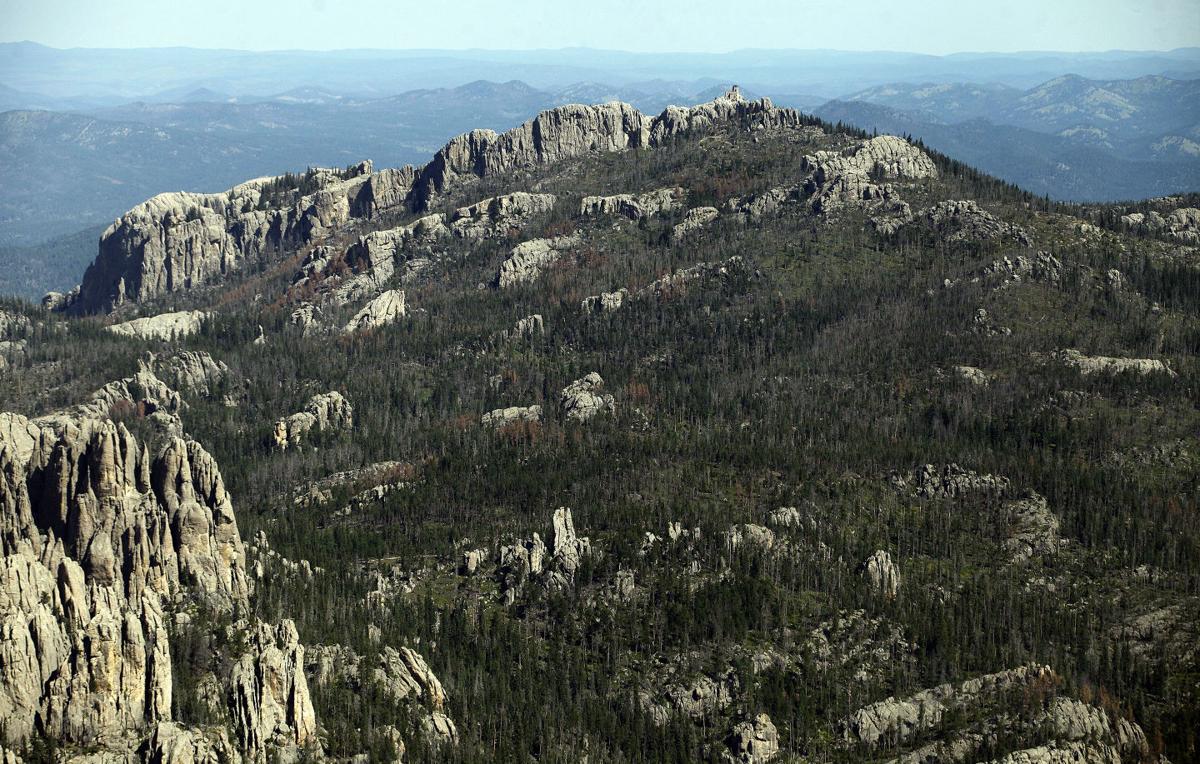 At this point in history, Paha Sapa belonged to the Lakota as per the Fort Laramie Treaty of 1851; however, the treaty was ignored and the American Lieutenant Governor K. Warren named the mountain Harney Peak shortly after the Battle of Blue Waters (1855). The peak is over 200 miles from the site of the battle. Naming Hinhan Kaga after William S. Harney was yet another mark of the U.S. effort to conquer and control the Native Americans—an act of degradation.

Nearly two decades later, a 9-year-old, Nicholas Black Elk received a Great Vision atop Hinhan Kaga (Harney Peak). Black Elk related his vision later in life to John Neihardt in the book Black Elk Speaks: "I was standing on the highest mountain of them all, and round about beneath me was the whole hoop of the world," he is quoted as saying. "And while I stood there, I saw more than I can tell and I understood more than I saw; for I was seeing in a sacred manner the shapes of all things in the spirit, and the shape of all shapes as they must live together like one being." 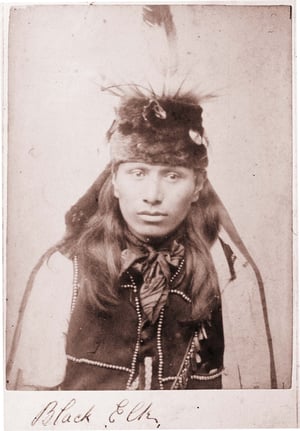 In the years that followed his vision, Nicholas became trained as a warrior—taking his first scalp in the Battle of Greasy Grass at age 13. While Black Elk continued to follow his cousin Crazy Horse into battles against the U.S. Army, Black Elk knew he was called to be a holy man [medicine man]. He became known as a healer and after a stint in Buffalo Bill’s Wild West Show, he returned to the Pine Ridge Indian Reservation and his people, the Oglala Lakota in 1889. There, he became involved in the Ghost Dance Movement, spiritual dances and rituals to rid the land of the Euro-Americans.

Black Elk experienced his last battle with the U.S. 7th Cavalry in December of 1890 at Wounded Knee, SD when the cavalry attacked his encampment where they were practicing the ghost dance. Wounded Knee is recorded as mass killing on U.S. soil: up to 300 Miniconjou and Oglala Lakota died that day. It was the last battle of the Great Sioux Indian Wars.

Chief Red Cloud had to convince Black Elk to surrender. Black Elk remembered of that time: “I did not know then how much was ended...I can see that something else died there in the bloody mud, and was buried in the blizzard. A people’s dream died there. It was a beautiful dream.”

For over 150 years, Hinhan Kaga stood as Harney Peak, but in 2016, the U.S. Board on Geographic Names [USBGN] officially changed the name from Harney Peak to Black Elk Peak.

"The USBGN recognized the wishes of Native peoples and many non-native South Dakotans that a new geographic name should be given to this feature that is regarded as a sacred site by several Tribes," the board says in a statement. The agency added that it was following its legal mandate to avoid names that are ‘shown to be highly offensive or derogatory to a particular racial or ethnic group, gender, or religious group.’”

The U.S. Board on Geographic Names comprises experts appointed by six cabinet-level departments and other federal agencies. The twelve-person board of experts and government officials unanimously passed the proposed change. While South Dakota’s governor and other officials did not approve of the change, they did honor the USBGN decision. It has been a slow change for the state, but a huge victory for the Lakota people and their leader Black Elk.

Maybe one day Black Elk’s vision of people of all colors, living in unity will come to light.

Help us raise awareness by sharing this story and the story of Native Hope with your friends and family! When you support Native Hope, you are investing in giving HOPE to the voices unheard.