The Black Hills of South Dakota offer a stark contrast to the vast plains that surround them. A landscape of natural beauty that boasts serene rolling hills and towering pines, the Black Hills were originally called Paha Sapa by the Lakota Sioux Tribe, meaning "hills that are black.” Today, people travel from around the country to enjoy the majestic views and rich history that the Black Hills offer.

One of the most renowned events that takes place in the Black Hills each summer is the Sturgis Motorcycle Rally. The largest gathering of its kind in the world, it attracts over a half million motorcycle enthusiasts each year. While the majority of visitors are simply excited tourists eager to take in the sights and sounds of this unique festival, there is a dark side happening behind closed doors.

Unfortunately, each year the Sturgis Rally draws more than just vacationers looking to enjoy some well-deserved downtime. Criminals in the trafficking industry view the event as a prime opportunity for sex trafficking. The grim reality is that Native Americans are at higher risk of being trafficked than any other racial group. In fact, 40% of sex trafficking victims in South Dakota are Native women and girls.

Since 2013, undercover sex stings conducted by authorities during the rally have resulted in a total of 65 arrests, according to information from the U.S. Attorney’s Office in South Dakota. While it’s a start, there is still work to be done in the fight against this awful crime!

Our goal is simple: zero trafﬁcking victims during the Sturgis Rally. Our Native Hope team and partners will hit the streets to arm thousands of people with the knowledge of how they can take action to stop traffickers and help bring them to justice.

Want to join us?

You too, can get your very own Rally Together t-shirt to help spread the word. Styles and colors vary. 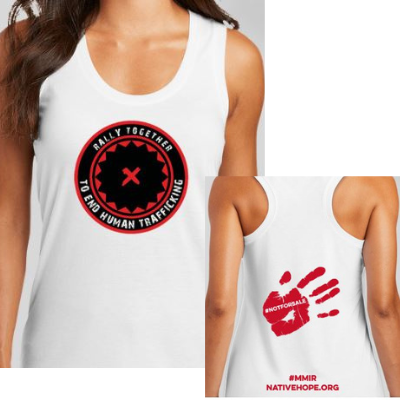