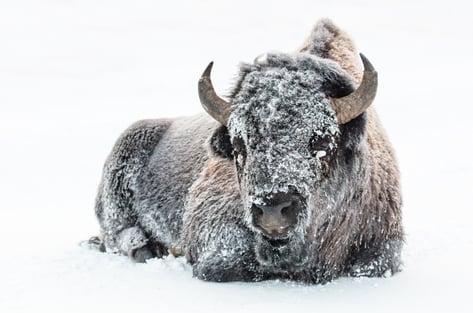 The tatanka provided “life” for the Lakóta and other Native American tribes. This massive animal was revered. The Lakóta gleaned everything from the animal in order to provide food, shelter, clothing, and tools for the people. Beyond the physical, the buffalo provided deep spiritual connection to the earth and the sky and carried heavy burdens of the people.

Unfortunately, this indigenous relative fell victim to the U.S. Federal government’s goal of expansion after the Civil War and its desired containment of the Native American people to reservations. “[Not until] every buffalo dead is an Indian gone,” said U.S. Colonel Dodge in 1867. Another colonel wrote in his 1872 annual report, “The rapid disappearance of game from the former hunting-grounds must operate largely in favor of our efforts to confine the Indians to smaller areas, and compel them to abandon their nomadic customs.” 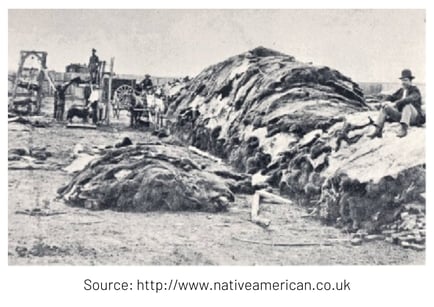 Soldiers like U.S. Calvaryman Buffalo Bill Cody killed buffalo by the thousands. Settlers were led to believe that the American Buffalo was a wild animal and it would become extinct, so killing them would rid the Great Plains of the wild. Buffalo hunts expanded to sport. The slaughter was horrific. Buffalo caucuses lay scattered across the Plains—stripped only of their hides and tongues. The hunts were wasteful, inhumane, and destructive.

By the 1884, less than four hundred tatanka roamed the 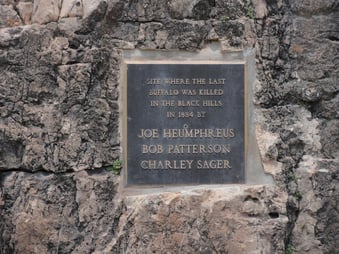 Plains. The people were lost.“Crow Chief Plenty Coups (1848-1932) described the mood of his people to his biographer, Frank B. Linderman: ‘[When] the buffalo went away, the hearts of my people fell to the ground.…After this, nothing happened. There was little singing anywhere.’” With the defeat of the tatanka came the defeat of the Lakóta, the last of the resistance.

Today, there are 500,000 tatanka living on reservations, in national parks, and on private buffalo ranches. There is continual controversy surrounding the tatanka’s domain as they are a nomadic animal and difficult to contain in parks like Yellowstone. Five thousand tatanka call Yellowstone home.

The tatanka survives today because of dedicated protectors and its humble spirit. Its spirit of humility and strength reminds Native Americans to stand for what they believe but to walk with modesty. Its beauty remains in its determination—proving the tatanka’s connectivity to its resilient relatives.

Native Hope recognizes the extreme importance for cultural revitalization and preservation.
Join us in our effort to share the Untold Story of Native America.