In the Field with Native Hope: October

As we move into the month of November and begin to share stories from Natives around the country who are participating in the #StorytellingHeals movement, we are also celebrating and sharing the work we get to do in our local community every day.

Continue reading to see what our team was up to during the month of October and be on the lookout for our "In The Field" posts that highlight the work of the previous month!

Over September 23-25, Native Hope Ambassadors Kyal and Kansas traveled to Pierre, SD for the 2018 Indian Education Summit to share their knowledge, build bridges, and to give tips to others about everyday life. The twin brothers presented twice during the event to two packed audiences of educators, administrators, and like-minded individuals.

During the first presentation, Kyal led the way with a presentation entitled, “The Advocate’s Perspective: A Native Student’s Lifestyle,” which gave insight about the different family values, community values, and school values that the Native student has within their lives. He also talked about the tough and real issues most native students face, from possibly tough home lives to the sense that they are walking in two worlds. It was very insightful and had great reviews from attendees.

The second presentation, “Invest in Yourself," was filled with positive interaction, tips, tools, and a simple reminder to invest the same energy into ourselves as we do everyone else. The presentation was well received by all those in attendance, and everyone left with a rejuvenated smile and a new sort of bounce to their walk.

Native Hope seeks to build bridges throughout South Dakota. Historically, relationships have not always been great between Native and Non-Native peoples, especially in Dakota Territory, but today, new and healthy relationships have begun, through the action and positive example of founder and director of Higher Power Sports, Tim Weidenbach, and Native Hope Ambassador Kansas.

Now, the two men have collaborated on many occasions to deliver a similar message of hope, unity, and respect to the future leaders of our societies and our country: school children in South Dakota. They capitalize on the many differences between them, but unite themselves as brothers in order to accomplish their similar missions.

This month, Tim and Kansas spoke together at two different public schools, one in Flandreau and one in Harrisburg on October 4th and October 24th, respectively. The two spent the day speaking to more than 300 students at the school. They were well received by the students and staff, with recommendations to other administrators to share their message of hope and unity.

Women in our society have always played a huge role in Native cultural success. Today is no different, but unfortunately our women, Native and Non-Native, have been targets of a heinous and violent crime: sex trafficking.

For the past few years, Native Hope has taken to the streets in an effort to raise awareness about this issue.

This year, we traveled throughout the state of South Dakota using red sand as a tangible and effective way to illustrate the massive sex trafficking problem. The Red Sand Project's goal is to fill sidewalk cracks in cities across the state with bright red sand. This eye catching approach helps spread awareness and shows our commitment to no longer let woman and children fall through the cracks. We collaborated with Call to Freedom out of Sioux Falls to launch this statewide initiative. 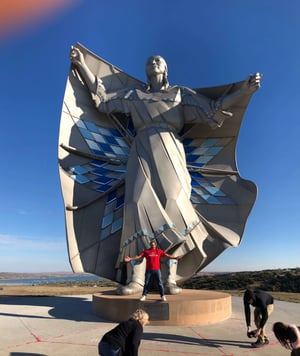 The Racing Magpie and the Red Ribbon Skirt Society are two groups of people dedicated to similar goals and objectives as Native Hope. Together, we want to establish a coalition of people, organizations, and businesses to make a true and long lasting impact on the sex trafficking of Native women.

Native Hope traveled throughout South Dakota promoting the Red Sand Project. The final stop during the campaign was at the Dignity Statue located in Chamberlain, SD. Later that day, the team went downtown and partnered with businesses along main street to raise awareness and show the community support for our women and children.

As the hunting season kicked off, we also launched our #neverinseason campaign dedicated to the elimination of sex trafficking.

Conversation with Sanford Hospital About Diversity

When it comes to the topic of diversity and inclusion in the workforce, there is no lack of conversation, which is a good thing, because despite the best intentions of many corporations to create a diverse and inclusive workforce, the numbers and experience of many people tell a different story.

On October 5th, Native Hope was brought to the table at the Sanford Medical Hospital, Clinic, and Long-Term Care Center in Chamberlain, SD to add ideas of inclusion, to expound on what that looks like practically, and inspire further discussion for the Sanford Hospital network.

Native Hope was given the opportunity to help start the discussion and give direction with understanding, perspective and truth. Sanford Hospital does a great job of trying to create an inclusive environment and to increase the presence of Native Americans, specifically Lakota and Dakota, on their staff. This is especially important because the hospital, clinic, and care center are primarily serving Native Americans. However, as we discussed with these teams, diversity is more than a number, it is a mindset, and it can’t be fully resolved by creating a job function or by hiring a certain number or percentage of minorities or female employees.

During October 6th-8th, Ambassadors Kyal and Kansas spent a few days with long time idol and role model “Joe” during which both learned the traditional aspects of primitive Lakota Bow and Arrow Making. They spent the weekend learning the cultural and traditional teachings of the bow and arrow. They were taught the importance it had for the Lakota society, from protection, hunting, and even to growth throughout life.

The Lakota received the gift of the bow and arrow from the Moon and the Sun, and it has many teachings. One of these teachings is about man and woman and how without one you can’t have the other. “Joe” shared his knowledge and teachings with many others that weekend, and his only request was to share with the younger generations of Lakotas. He showed them that the Lakota Bow and Arrow is more than a tool, it’s a way of life.

Kyal and Kansas will use their new knowledge to share with the young people they already work with and with the ones they have yet to meet.

On October 11th, Native Hope joined host Richie Richards in Rapid City, SD to be featured on Oyate Today, a half-hour TV program that airs every Saturday night, in order to talk about the work we are doing to break down barriers and inspire hope for Native people. They spoke on past successes, the mission and goals of Native Hope, and also the future events and projects that are upcoming.

Oyate Today reaches out to the Native American population in the Northern Plains and endeavors to inform viewers on the history and culture of the Lakota.

Like Native Hope, Oyate Today treasures open communication and the sharing of stories as the key to understanding. 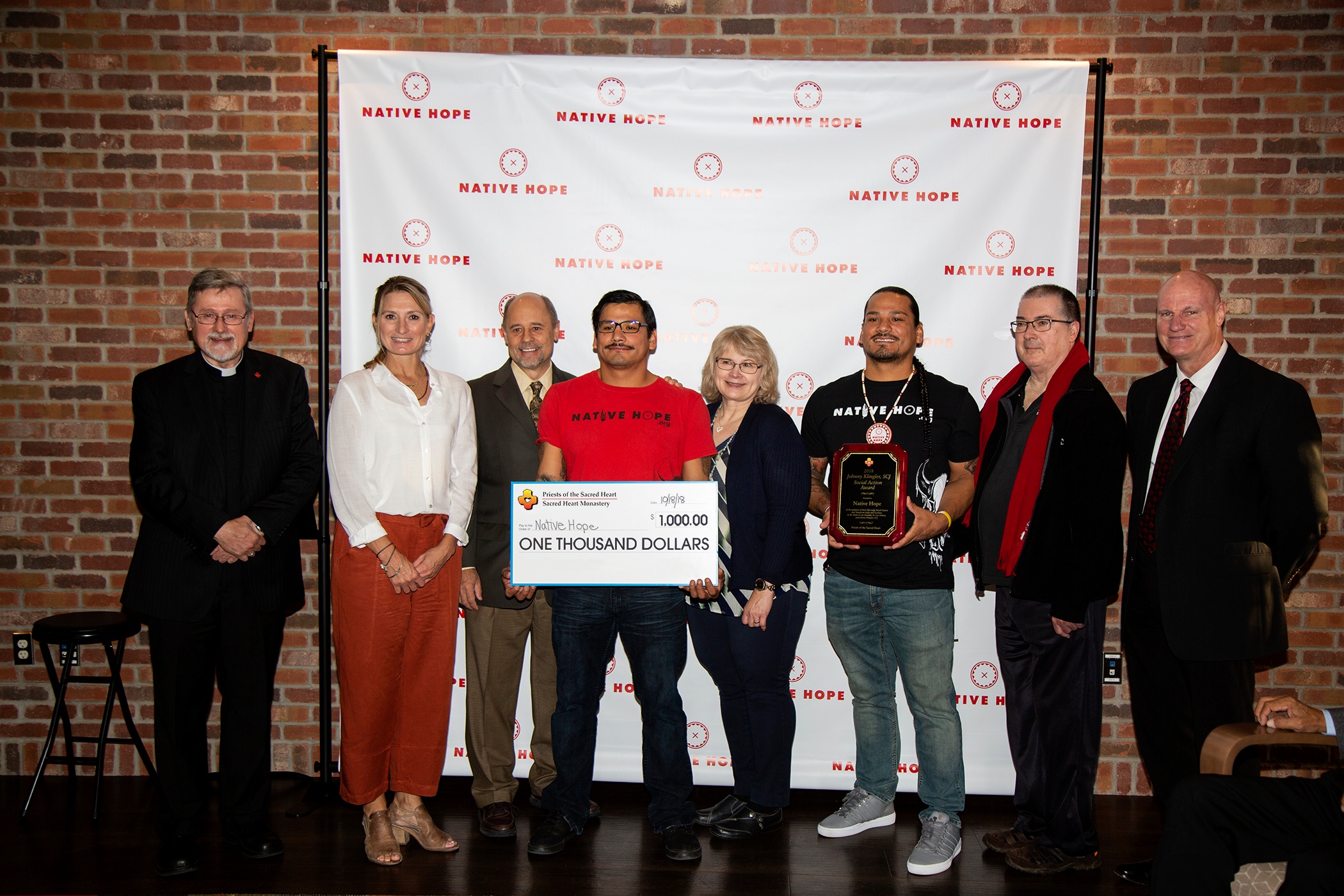 We are proud to announce that we were the first-ever recipients of the Johnny Klingler Social Action Award. The award was given to Native Hope on October 18th by the Justice, Peace and Reconciliation Commission through the Congregation of the Priests of the Sacred Heart.

Here's an excerpt from the award announcement: "The mission of Native Hope is to dismantle barriers and inspire hope for Native voices unheard.  The organization is an advocate for the marginalized and voiceless – a true mark of social action – and sex trafficking victims desperately need a voice. Native Hope’s work in the field of sex trafficking has brought awareness of the issue to thousands of people through speaking engagements, community events and social media." 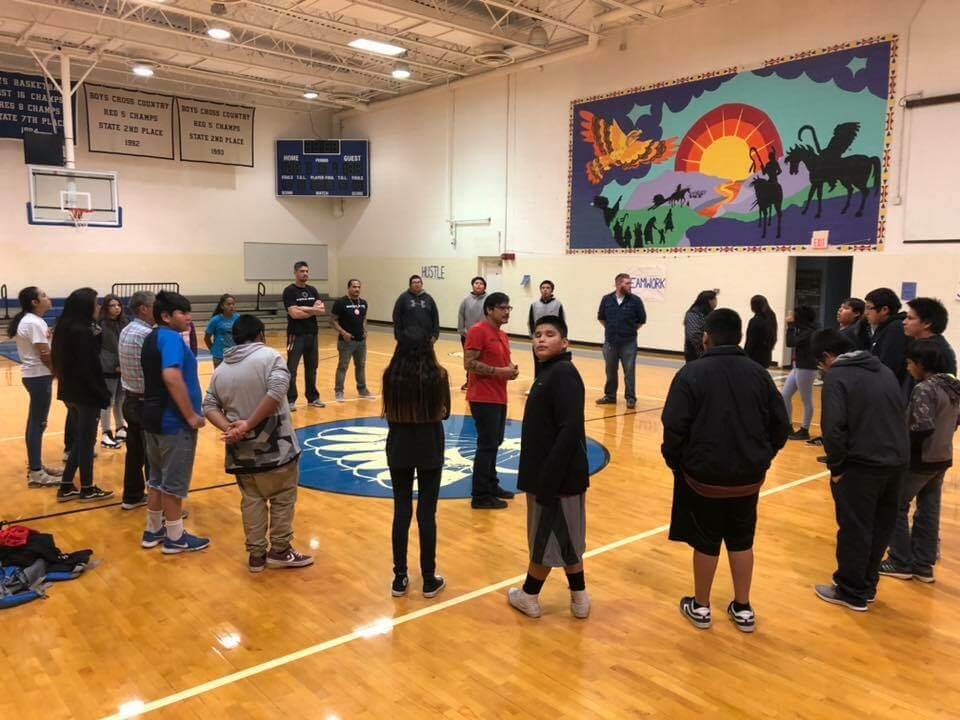 One of the biggest goals here at Native Hope is to empower the next generation of young people, so they can grow up knowing who they are, where they came from, and to grow up full of hope knowing they can accomplish all their dreams and goals.

As part of this effort, Kansas and Kyal spent time at Takini Indian School on October 18th, working with kids and talking to them about breaking cycles of hopelessness in their families and communities.

Hopelessness can be found anywhere people are found, but in Native communities hopelessness can easily get passed down from generation to generation. It’s an endless cycle created from a broken circle and is often hard to escape.

Kyal and Kansas are committed to showing the next generation through own lives that no matter who you are and where you come from, all things are possible. They uplift youth by giving them life experiences, sharing their teachings, and letting them know believing in yourself is the ultimate goal to achieve success.

"Brains of Addiction: From Trauma to Repair Training" Workshop

Executive Director Trisha Burke and Ambassador Kansas got a chance to attend this powerful workshop in Rapid City, SD on October 25th. The day-long presentation focused on understanding the addicted brain and how it can be repaired and healed. 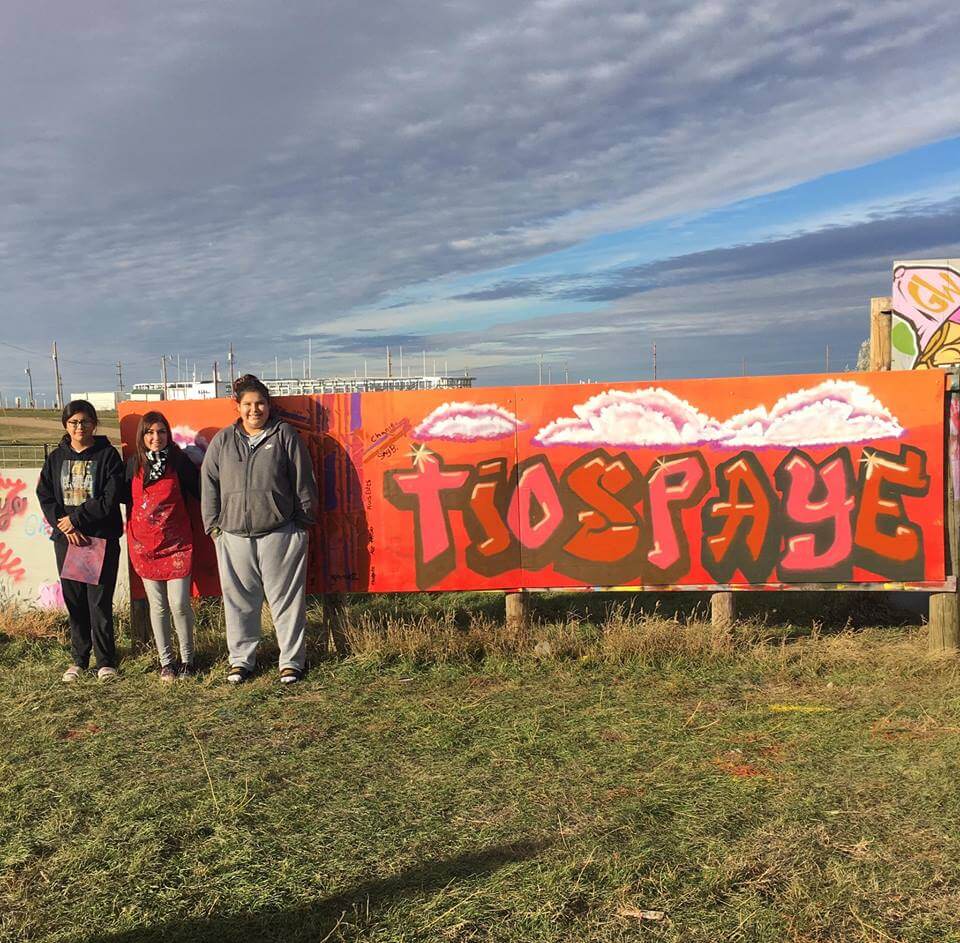 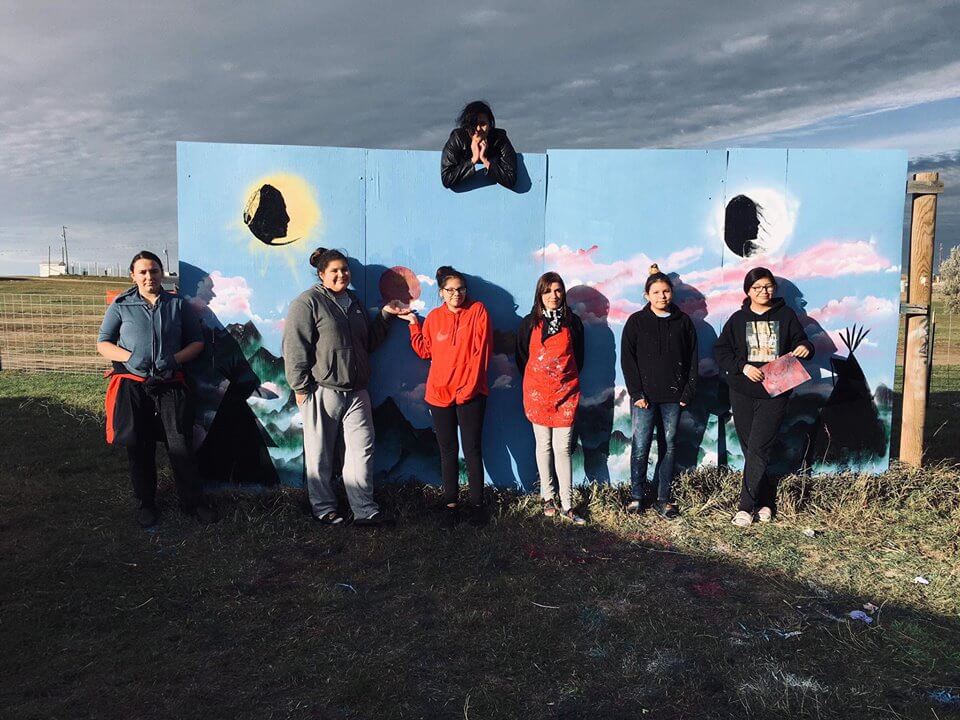 During October 25th-28th, Alexis taught a “Mural as Storytelling” Workshop at Cheyenne River Youth Project. The class was provided for 7 teenage students from the Cheyenne River Sioux Tribe. Through Native Hope’s partnership with Cheyenne River Youth Project, plenty of supplies were available for the workshop. The group of 7 students, with the guidance of Alexis, created two murals in the CRYP’s Art Park. One was influenced by the theme “nature,” and the other was influenced by the theme “family.”

We are passionate about sharing stories and breaking down barriers to hope for Native people, and grateful to get to do the work we do! This month, during our #StorytellingHeals movement, we want to hear from all of you: what is your Native hope?

Bus Tours, Art Shows and More: In the Field with Native Hope

"Writing Was My Outlet, My Church": Poetry and Wisdom from Sunny Red Bear, Native Author and Activist