Teenagers love to express themselves with shocking hairstyles, unique makeup, and eccentric clothing. This is why the signs of self-mutilation escaped my eye until it hit me full in the face with the truth.

“This is how I deal. Every cut lets me know I am still here,” she told me while visibly hiding her cuts under her half gloves.

I was taken aback. Truly, harming oneself to “feel” never crossed my mind as a possibility. Even more important to consider is the fact that I would have never guessed it was a problem amongst the teenagers at my school, nor that my Native American students were at an even higher risk category for the behavior.

“You know, how when you’re having a bad dream, you pinch yourself to wake up? That’s what self-harm was for me,” explains another former student from the Lower Brule Sioux Tribe. “In a way, it was a call for help without being told you’re ‘looking for attention.’” She adds, “Yeah, I was looking for attention but not for pity. For actual help. These thoughts just don’t ‘go away’!”

Understanding the concept of self-mutilation or self-injury is difficult for most to comprehend, especially because those who engage in the act are more numerous than most of us know. In fact, statistics show that one in five females and one in seven males engage in some form of self-injury.

Another stat estimates that “one in every 200 American girls between the ages of 13-19 practice 'cutting' [the practice of using a razor blade or knife to make cuts on the body to ease emotional pain] on a regular basis, while as many as 4 percent of adults in the US engage in some form of self-harm.” In fact, in the U.S. there are two million cases reported annually—the key word is "reported."

It is difficult to estimate an exact percentage of those immersed in these behaviors due to the various forms of the affliction beyond cutting: burning, head-banging, picking wounds, hitting and pinching oneself, intentionally breaking bones, ingesting harmful chemicals, substance abuse, eating disorders, self-piercing—need I go on?

Since the practical research shows that self-harm often begins during the adolescent years, it seems that the disorder may be closely associated with the pains of adolescence. One of my former students endured bullying throughout her childhood and suffered under

She explains, “When you are in a constant battle with your own thoughts, all you know is you need out and now! You take the razor to your desired area. (Mine were my hands, wrists, and thighs.) The sharp pain you feel almost distracts you from these thoughts.
Seeing the blood running out stops your thoughts. In most cases, you slowly start to settle down because something about this is almost poetic—as the blood runs out, so does the negativity.”

How long will it go on

“When a person cuts, it calms them down, and that registers in the brain as a calming mechanism,” says Dr. Paul Hokemeyer, a certified clinical trauma professional who frequently appears as an mental health expert on ABC’s Good Morning America and other programs. “Once that happens, it’s a behavior that she will always be drawn to for the rest of her life.”

Cutting is an impulse-control disorder usually associated with personal trauma, and it is highly addictive—“as addictive as a narcotic.” Trauma such as physical, emotional, and sexual abuse are leading stressors. This brings me to the frightening reality for many young American Indians: statistically more of them experience these types of trauma in alarmingly higher rates than other ethnicities.

According to Cheryl Kary, the director of the Sacred Pipe Resource Center—a nonprofit in Bismarck-Mandan, North Dakota, “It’s [self-harm] a growing behavior. It is important for youth to understand why they cut [self-harm] and understand it comes from trauma, grief, and other strong feelings.”

Young people committing these acts against themselves are willing to hurt themselves to focus on a different pain, to find a different rush of adrenaline, to verify existence. Sadly, unless the emotional state of the person changes, this addiction will continue.

One of my former students explains, “In a way the physical pain bounces you back into reality, and suddenly death doesn’t seem so sweet anymore. But in some cases where hysteria blinds you…and you cut…and cut…and keep on cutting, hoping to hit the spot of no return and not feeling a thing because you’re so numbed by your own thoughts, and the only way of stopping...is if you grow tired or someone runs in and stops you.”

Coping with self-injury and negative thoughts 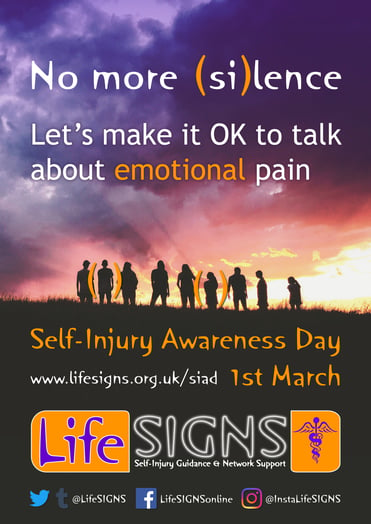 Young people need to learn other coping mechanisms. They need to give “voice” to their trauma and understand it is okay to have negative feelings. Learning to grieve in a healthy manner is key. Therapy, meditation, exercise, building healthy self-esteem, and other outlets may provide the most relief.

“Distraction. That’s really all that we need,” says my former student. “Most cutters find a hobby to do instead of doing self-harm, like playing guitar, drawing, writing poems, or anything else! Mine was poems…I let my anger and sadness out through poems.”

Her mouth is smiling.

Her eyes are crying.

On the outside she's laughing!

On the inside she's dying.

The spotlight is on her acting.

The audience is applauding.

The poem expresses her pain, but that expression allows her pain to come out in a less destructive manner. In fact, her poem may even encourage another person to seek help.

While my student found her salvation in poetry and performance, her pain can still rear its head, so the temptation to cut follows. It is an ongoing struggle with her inner self. She admits that it haunts her even now—years after she quit cutting.

She and others like her need the support of friends and family, healthy distractions, and/or counseling in order to resolve the addiction of self-harm. For some, it will be a lifelong battle, but there is hope.

Native Hope encourages those who need help to ask: NO MORE SILENCE. Please join us in our effort to bring more awareness to the affliction of self-harm.

From the Carolinas to Oklahoma: The History of the Cherokee Nation