The Legend of the White Buffalo Woman

One summer a long time ago, the seven sacred council fires of the Lakota Sioux came together and camped. The sun was strong, and the people were starving, for there was no game. Two young men went out to hunt.

Along the way, the two men met a beautiful, young woman dressed in white; she floated as she walked. One man had bad desires for the woman and tried to touch her. But, as he did this, the man was consumed by a huge cloud and turned into a pile of bones.

The woman spoke to the second young man and told him, "Return to your people, and tell them I am coming."

This holy wakan, woman, brought a wrapped bundle to the people. She unwrapped the bundle, giving the people a sacred pipe and teaching them how to use it for prayer. "With this holy pipe, you will walk like a living prayer," she said. She taught the people of the plains their sacred ceremonies.

The woman told the Lakota about the value of the buffalo, the women, and the children.

"You are from Mother Earth," she told the women. "What you are doing is as great as what the warriors do."

Before she left, she told the people she would return. As she walked away, she rolled over four times. Then, she turned into a white female buffalo calf. Hence, she is known as the White Buffalo Woman or White Buffalo Calf Woman.

Mothers connect us all to the sacred

The Native American way of life understands the whole world as sacred. Family, tiyospaye, is sacred, the earth is sacred, and all of life has meaning in the interconnected, cangleska wakan, the sacred hoop.

In this circle of unity, women are revered as beautiful and powerful because they are the givers of sacred life. They are grounded in Mother Earth and connected to Father Sky, bringing children into the world through the power of their life giving love.

Like Mother Earth, who provides everything we need to live and to thrive, the woman is able to give everything a human child needs. She nourishes, she loves, and she protects.

Without women, there is no hope, no future, no carrying on of tradition and culture. This is why Native American cultures have always honored and respected women, elevating them to positions of reverence and honor in the tribe. Mothers and grandmothers raise the children, teaching them how to live life honorably, with respect for elders and for tradition.

The force of a mother’s love

But many women are persevering. These Native American mothers are examples of faith, perseverance, and life-giving love. Read their full stories for inspiration and hope. 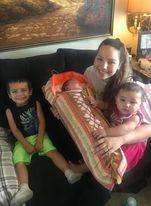 Trista, Hunkpati, says being a mother is one of the greatest honors in the universe. “I thank my kids every day for choosing me to be their mother and tell them how honored I am…to guide them in this world.” As a Native American mother, Trista celebrates her children as “wakan” (sacred). “It’s the greatest privilege to spend any second I can with them, they’re good medicine” (positive feelings/healing). Additionally, Trista gives much credit to her children’s uncis (grandmothers) for having a major impact everyone in the family—“they influence our lives and the way we do things as a family.” 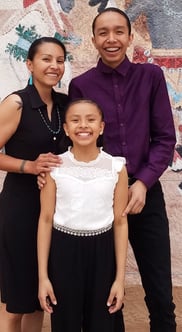 Nikki Lowe, Chickasaw, is a BIA officer, a former MMA fighter, and a mother. "To me being a Mother is knowing that I am the world to my son and my daughter. It's unconditional love and being the biggest role model to them. It's being their biggest and loudest fan in the stands, cheering them on when it comes to sports activities, staying on them about education, so that they can have the privilege of playing sports. [It's] cooking their favorite meals or getting their favorite snacks from the store, watching movies with them and talking about it afterwards, and going to the park and playing basketball together or going for hikes."
Nikki also knows that "talking to them about the importance to be kind to people and to carry themselves well and telling them every single day that I love them" is key! "My kids are my world and my whole heart. Motherhood is the most amazing thing that could have ever happened to me. I love being a Mama." 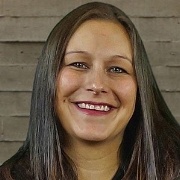 Jaime, a Hunkpapa Lakota, has her own story of struggle with drug abuse. But her love for her children gave her the strength and motivation she needed to make changes in her life. “I always struggled with how my mother lost her kids due to her addiction, and here I was losing mine for the same reason. Wanting to keep my kids was my main motivation to get sober...I finally became the mother I always knew I could be, and I broke the cycle.” Now Jaime works as a substance abuse counselor in Indian country, helping others break their cycles.

Brandi: after a struggle with addiction, one by one, she regained custody of her children. Brandi shared, “My daughter was 4 when I left. When I finally had her ‘home’ again, she said, ‘Mommy, I couldn’t remember your face. It is so beautiful.” The love of her children and new husband motivates her; she works daily and diligently to live a life with a clear mind and an open heart. Now, Brandi runs a support group in Sisseton and opens the door to everyone: using addicts, recovering addicts, children, extended family, and friends. No one is turned away. They share a meal. They share their stories. They share encouragement. They share acceptance. They share hope.

The force of motherly love inspires strong Native women to conquer their own struggles for the sake of their children. Strong grandmothers and mothers care for and love more children than just their own. They nurture young people in youth centers, in schools, in broken homes, in their larger community because of their love and in their reverence for life's beauty and sacredness.

Native Hope is proud to celebrate and tell the stories of the beautiful lives of Native women and Native mothers across the centuries.