Sparking the Light: Sports and the Pursuit of Education

Education is part of the fabric that weaves our future and opens up doors of opportunities to accomplish our dreams. For generations, however, the educational rights of Native Americans have been deteriorating under the weight of historical trauma and cultural contempt. At Native Hope, we are joining with a generation of Indigenous youth who are determined to pursue an education that does not compromise their Native culture, language, or spiritual beliefs.

The issues surrounding Native American education are rooted in a history of upheaval, beginning with the government “relocation” of Native children from their families and tribal way of life to long-term boarding schools. It was a common practice at the time for this type of school to allow 'disciplinary' punishment, such as physical beatings or starvation, of Native American children for speaking their Native language or practicing their spiritual beliefs. These schools, however, would later be exposed and dismantled for allowing such excessive forms of abuse. The inexcusable circumstances that Native children faced during this time in history, however, have continued to have deep-rooted ramifications on the way American Indians relate to “mainstream” education.

As a result, Native American children have the highest dropout rates of any ethnic group in the United States. Recent statistics from the Bureau of Indian Affairs have noted that between 29% and 36% of all Native American students drop out of school, mostly between the 7th and 12th grades. These numbers are even higher in areas where the parents complain of a major lack in understanding of Native culture. They are confronted with a world that does not understand them or their customs, and they are enveloped in an environment of isolation and self-doubt.

However, through each passing generation, Native Americans have been finding their voice and reclaiming their future. For many, the process of hope and healing has come through not only a pursuit of culture and education, but also through a passion for sports and the discipline, dedication, and drive they afford.

In 2017, a former Native Hope team member took part in the Dakota Oyate Challenge. Celebrating its 29th year, this annual basketball tournament brings in eight teams, both boys and girls, from around the state of South Dakota, as well as a team from Omaha, Nebraska. This event, along with the Lakota Nation Invitational taking place later this year, strives to attract college scouts for recruitment purposes. Both of these tournaments showcase players who may not have many opportunities to be seen due to the remote locations of most reservations. 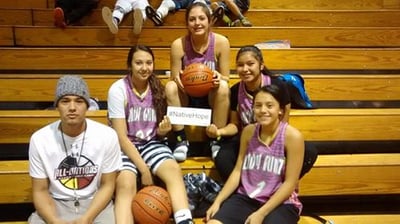 It was exciting to have the opportunity to participate in the Dakota Oyate Challenge as a coach for his alma mater, Lower Brule Sioux, who won the title this year giving themselves back-to-back championships. Recalling his experience, Kansas expressed how proud he is that “we have educators and administrators who work together to provide this much-needed outlet for our youth. They know our youth are the future!”

During this three-day event, tournament officials are committed to giving student athletes the spotlight. They arrange different activities between games to display individual talent, and they also provide various college booths. But most importantly, as Kansas states, “They provide hope….hope for our youth to use basketball as a tool to provide opportunity for a better future.” 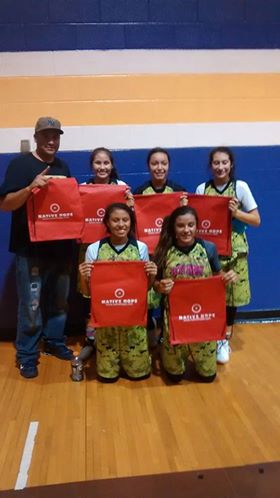 There are places in this country where basketball is not just a sport but an all-consuming passion—in rural towns, inner cities, and for decades, on Native American reservations. 'Rezball,' as it's called [a nickname for reservation ball], has long been a thread throughout Indian country. Kansas recalls an article in a 1991 Sports Illustrated issue where writer Gary Smith described basketball as “a game the lean, quick men on reservations could instinctively play—a game that restored a sense of pride in Native American communities.” And this is exactly what’s happening. Native youth are coming together through their rich tribal cultures, histories, traditions, and rezball, which Kansas explains “has become another way to help keep tribal spirit and identity alive.”

“Sports for Native American youth growing up on the reservation are more than just games. They are a livelihood, a way of life, and an outlet for our kids. Most kids have the mentality 'Ball Is Life,' but for Native American youth 'ball really is life!' We know the better we are at sports, the better chance we have to receive a scholarship to try to create a better life for our family and our people,” exclaims Kansas. He goes on to explain the fact that “often times most high school graduates don’t attend college because they can’t afford to.” A sport’s scholarship opens up a world of opportunity that would otherwise not be possible.

Jordan Daniel, an advocate for Native American issues in Washington, D.C. and granddaughter of Native American runner Nyal Brings, shares the important role that sports played in her life. “Running is a challenge to better myself every day. It gives me
structure, and it is a great stress reliever.” She also explains how sports involvement helped her developmentally—something she believes to be true for a lot of Native American youth. “Being active and playing a sport teaches them those social skills to be outgoing, vocal, loud, and assertive; however, for most Native Americans, we tend to be naturally quiet, more soft, and gentle when it comes to social events. So, for me, I found that sports pushed me outside my comfort zone and helped me speak up more and got me more involved with my peers.” 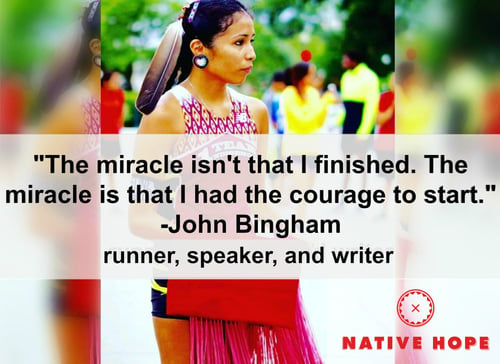 Jordan (pictured here) also echoes Kansas in stating that “participating in sports is a way for some of the youth to have the opportunity to continue their education.” She continues, “Sometimes it's a ticket out of the place you want to leave to experience something new....the more youth are engaged in their community, specifically with sports, it lets them grow, gives them a challenge, teaches them structure that stems outside of that sport. And [it allows them] to push themselves...it teaches them to be a team player.”

These life lessons learned from sports often inspire Native youth to pursue an education in order to seize a brighter future for themselves as well as their families. Jordan shares, “Some youth that I have been lucky to get to know, chose sports...because it was time away from home to escape some of the hardships they were facing, and some used that as a catalyst to ignite a fire within them to have a passion for something.”

The bond between sports and education, specifically among our Native youth, is paramount. Your support and partnership with Native Hope goes directly to funding opportunities to find their passion and pursuit it.