“During my junior year, I became the right hand man to Brother Renee Roy. He was an English major, and he was fostering me to go to Notre Dame. He introduced me to Macbeth and Hamlet…I loved that,” shares Reuben. “I wanted to go out East and learn. I wanted to be a part of that culture,” explains Reuben. “I traveled back East to Poughkeepsie, New York, with Brother Renee and was offered the opportunity to go to seminary.” 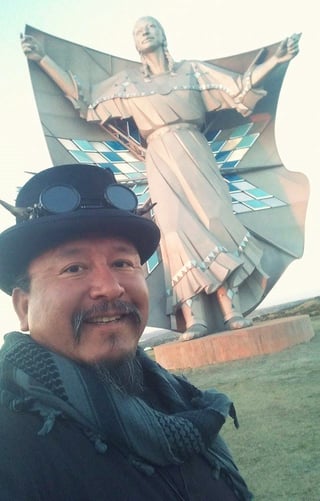 Reuben woke up to Latin singing every morning while living among the Brothers. "It matured me," he admits, then adds wryly, “but no sex, drugs, or rock 'n' roll?” Needless to say, Reuben decided to forego the seminary. Read Part 1 of Reuben's story here.

Not only was Reuben interested in academics, but also he was a gifted runner and basketball player. In fact, he still holds track records at his high school.

Reuben graduated as the class salutatorian and was accepted to Notre Dame. “I visited the campus," he recalls. "All I wanted to do was run, but I would have had to redshirt, so I declined and went to Black Hills State College [Spearfish, South Dakota].”

At college, Reuben fell into the traps that many freshmen do. He realized that he needed to find out who he was, so he dropped out and went back to Pine Ridge.

He asked himself, What is this Lakota thing? This is when he decided that he needed to figure out his heritage and the role his culture played.

Perhaps this is because for Reuben, “cultural life was one of feast and famine.” He juxtaposes his cultural experience with that of his ancestors’ experience: “When the buffalo would come, we [the Lakota people] would feast and then experience famine 'til the next bison hunt...”

Reuben had, in essence, been in a state of famine since he lay on the floor as a young boy listening to his elders speak Lakota as he fell asleep.

A renewed sense of purpose

He studied dances. He researched regalia. He entered powwows.

Reuben submerged himself into his Lakota culture, finding his place in the circle. “I didn’t dance to compete—I did it for my people. It was more rewarding for me. If you give to the universe, the universe will give back,” Reuben discloses with a smile.

Over the years, Reuben has found various ways to serve his people. He has traveled the world entertaining and educating audiences through music, dance, magic, and spirituality. Eventually, he obtained a degree in general studies with an emphasis on Lakota language from Sitting Bull College on the Standing Rock Reservation. 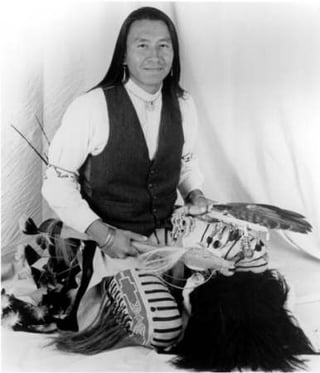 “The language is important to us [Lakota] because it defines us as a culture. It is key to everything that is central from the ceremonies, to the humor, to receiving a name for a child,” Reuben explains.

If the people don’t learn the language, ceremonies will lose their meaning and eventually disappear. He also stresses the innate humor that is Lakota and uses that humor whenever he can.

For many young people, a sense of identity eludes them, but for the Lakota the systematic stripping of the culture, including the language, has made the journey of finding oneself even more elusive. The Lakota language in itself holds cultural ideals that can help to preserve and teach people to understand what it truly means to be Lakota.

Native Hope and our partners seek to promote the revitalization of Lakota, Dakota, and Nakota. We are committed to exposing young Native Americans to their languages by supporting the efforts of speakers like Reuben who are dedicated to ensuring that the languages live.

Next PostImpacting a Community: A Vision of Hope on the Reservation