Following college, Jordan Daniel (Brings Three White Horses) took a job with the National Indian Health Board as a congressional relations policy associate in Washington, D.C. During this time, she worked on special programs addressing the prevalent issue of diabetes amongst the Native community. Jordan was inspired to pursue a position with Indian Health Services (IHS) after observing her mom’s career in the health field as well as her grandfather Nyal’s service as a tribal health director, where he taught and wrote grants for over 20 years. (To read part 1 of Jordan's story click here.)

Jordan has now been in Washington, D.C. for three years. She has since worked as an Indian affairs liaison with Maine Congresswoman Chellie Pingree and is now a federal contractor with  Tribal Tech, LLC, a Native woman-owned company. She manages grant portfolios designed to help fund language revitalization, social and economic development, and suicide prevention for over 180 tribes across Indian country.

Jordan is finding the balance of D.C. life. She says, “It can be easy to lose yourself here, getting stuck in work mode and becoming kind of like a robot. It’s so easy to wear yourself out, especially if you’re a passionate person and really driven by what you’re trying to change.”

She finds her escape in running, something that’s passed on from her grandfather and that she’s been doing both professionally and recreationally since she was ten years old. She’s also been happily surprised to find a vital Indigenous community that has become like family to her.

She is also finding a deeper connection with her Native heritage by learning the Lakota language. Due to moving away from the reservation at such a young age, Jordan always felt like the language was a missing component to her cultural identity. “When I started speaking it, I started to feel like I was connecting back to my roots,” she says. Not only is she learning the language, but she is learning it from curriculum written by her grandfather, Nyal, who passed away in August of 2016. She confides, “It was something I promised myself and him, that I would learn the Native language. It makes me feel more connected to not only my culture, but also to him.”

As Jordan experiences a deeper bond to her culture through language, she is inspired to continue promoting 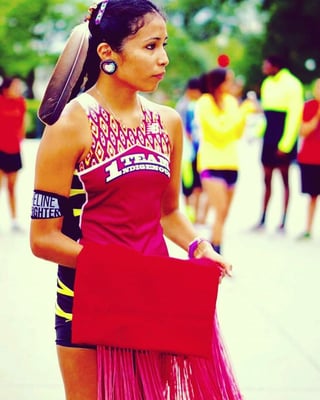 programs that focus on language revitalization in Native American education. She says, “A lot of youth in these programs are saying that they feel more connected to their Native identity, their culture, and their ancestors by learning their language and speaking the tongue. A lot of Native youth say that they struggle with living between two worlds—trying to live in our traditional culture and trying to live in modern day society.” She strongly believes that language plays a vital key in connecting Native youth back to their cultural identity.

Jordan shows no sign of slowing down anytime soon. Earlier this year, she completed the Boston Marathon to raise money for Running Strong for American Indian Youth. She is also in the process of creating her own non-profit, Team 1ndigenous, a program designed to help encourage the value of sports, health, and wellness for Native American youth and get them active. Her hope is to launch the program in the fall of 2017. She continues to run professionally with New Balance and is hard at work training with her sights set on the 2020 Olympics. To top it all off, she was recently named one of “The Hill’s 50 Most Beautiful”
of 2016.

It’s hard to believe that this strong and self-assured woman ever dealt with confidence issues. If Jordan could go back and tell her insecure, fifteen-year-old self just one thing, it would be “to own it.” She adds, “I didn’t own it until I was in college. It wasn’t until I took college classes in Indian studies and had Native professors really engaging in conversation with me and helping me through that identity struggle. I would tell myself to not deny who you are, to love yourself, and accept yourself. Be confident in yourself.” 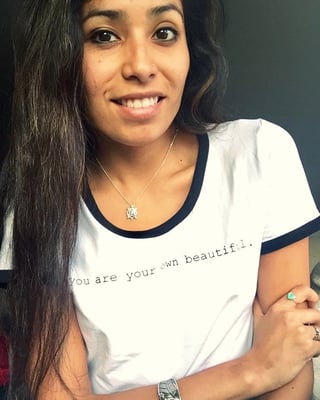 Jordan has a strong vision of hope for the future. She says, “Hope means to me that not only Indigenous people, but everyone comes together in a unified understanding of what the struggles are and works to make them better in a collaborative effort.”

She believes in the power of unity to bring about lasting change in the lives of her people, and at Native Hope, we applaud her efforts. Her story shows how one person can make a tremendous impact in the lives of many. United together, we can promote change, provide hope, and create a brighter future for Native Americans.

We invite you to join us as we seek to bring lasting change with tangible programs to a generation of Native American youth.

Education on the Reservation: an Investment in Hope